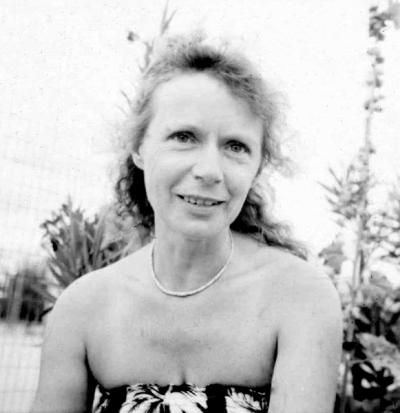 The Hannelore Quander-Rattee Works-in-Translation Reading is an annual presentation in the University of Arizona Poetry Center’s Reading and Lecture Series. Established in 2014, this event features translators of poetry, international poets, and writers and scholars working with the boundless possibilities of translation.

Hannelore Quander-Rattee was born in Breslau, Germany (now Wroclaw, Poland) in 1943. During World War II, she, her mother, and her three siblings fled before advancing Russian troops, ending their flight in what became West Germany. In 1961, she married an American and left Germany to live in Denver, Colorado, where she had a daughter, Paitra, and taught herself English. After divorcing, she became active in the Denver arts scene, and began writing in English and illustrating books and broadsides for Denver poets. She later decided she wanted her daughter to get a German education and returned to Germany. While in Germany, she worked as a German/English court interpreter.

After nearly a decade in Germany, Hannelore returned to the United States and settled in New England where she met her second husband, Michael Rattee. They moved to Tucson, Arizona, in 1978 and immersed themselves in the poetry scene. Hannelore was managing editor of Prickly Pear/Tucson: A Poetry Quarterly, co-directed the Mosaic Reading Series, and served on the Tucson Poetry Festival committee. She was a member of the Bethesda Players, a reader’s theater group that performed Dylan Thomas’ “Under Milk Wood” several times. During this time she wrote her own poems and translated work from and into German. Especially fond of the work of Günter Eich, her translation of his radio play “Tiger Jussuf” was produced on Arizona Public Radio. Working with William Pitt Root, she translated the poems of Heinrich Bӧll.

While living in Tucson, she worked as a design painter, managed an appliance store, and owned an advertising specialties business. She died of cancer in 2011.