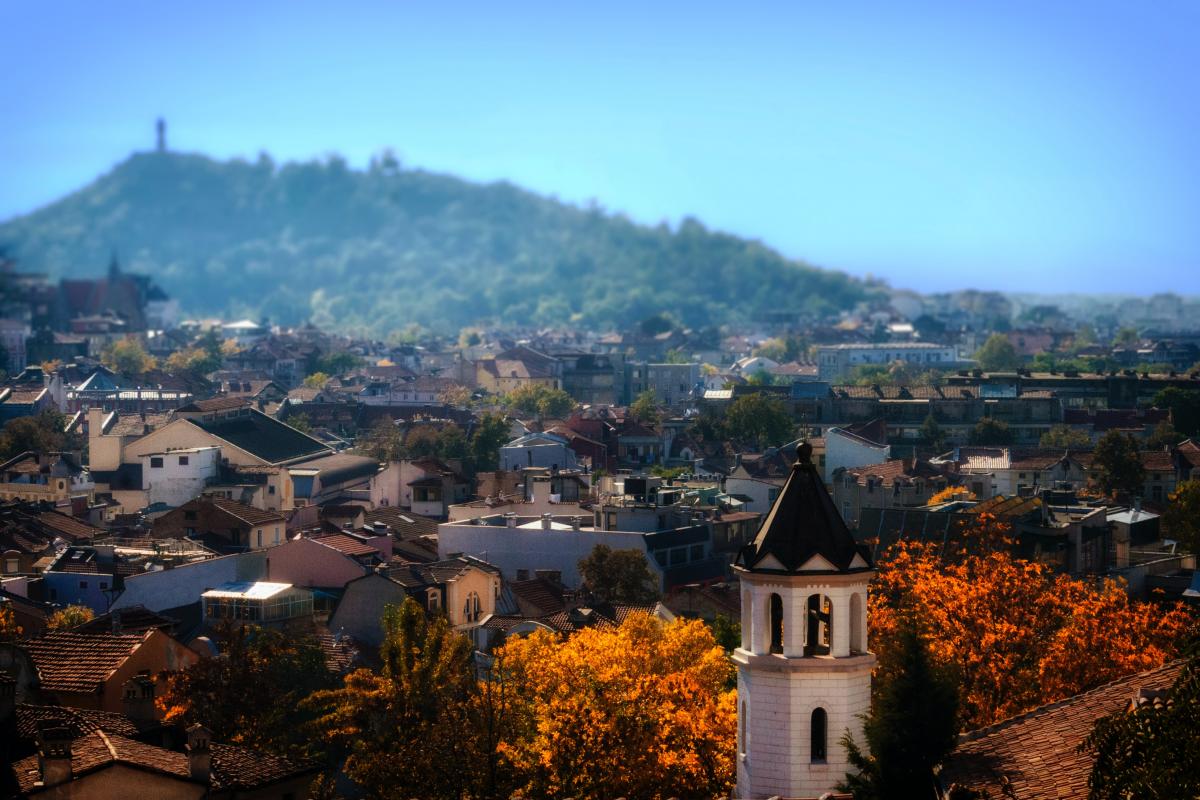 Right now we're stuck under a tree in the middle of nowhere getting rained on with lightning really close to us and we have no food. And here I thought this was going to be fun! Now let me tell you how we got here. This whole story started in Plovdiv, the second largest city of Bulgaria. My parents and I were on a year-long bike tour and we had a friend who lived in Plovdiv. While we were in Europe we decided to go there. We stayed in Plovdiv for a day and our friend Anton showed us around. In the city, there were modern shops next to ancient Greek and Roman ruins since Plovdiv is the fifth oldest city in the world. The next morning we said we were going to leave to ride down to the northern coast of Greece and back, and that we would return in about ten days. What a relief it was when Anton said he would ride us out of town. Riding your bike out of the center of a city you don't know is like trying to get out of an endless maze!

While we were riding out of town, we wanted to ask some people if the road we were going to go on actually existed since it was on the map, but a very faint white line. On the way out of town we rolled up on a cafe with four old Bulgarian men playing cards and we asked Anton (since we did not know Bulgarian) to ask those men if the road existed. Three said that it did not exist, but one said that when he was a kid he went fishing up there and that it did exist. My guess is that this man was over eighty years old. We, not so wisely, went with the one.  And so we set out into the unknown.

At first, the road was smooth, nice pavement. The storm seemed far away and non-threatening. After a few hours of traversing the countryside, through trees and alongside gorgeous rivers, we got to a small village, but we did not stop. We also did not realize that this was going to be the last town for the next several hours. After that village, the road turned to a nice smooth dirt and everything still seemed completely fine. Slowly but surely, the road became more and more bumpy and the sky started to rumble. At first it was just mist, not even drops, but then it was as if we hit a wall of torrential rain. The mud on the ground got so thick I could almost not pedal any more.  After it started raining, all of us got very quiet, afraid to say the wrong thing and provoke the others.

On the path (because by now it was not a road anymore) there were lots of gigantic puddles and at some of them we had to venture off of the road and into the forest to get around them. Whenever we had to go through puddles it would gum up the cassettes, chains and brakes, preventing the bikes from being able to move at all! Then, we would have to stop and clean them off, plus it wore them down and then they wouldn’t last as long. At one point, we decided to stop under a tree, and here is where my story began.

No one was having fun. I was cold, wet, tired, terrified and hungry. We contemplated putting up the tent and staying the night. We could not though because we did not have enough food. (After that, we always decided to bring more food!) After half an hour, my parents decided we had to keep moving to beat the dark. I did not want to keep moving, but the thought of getting stuck up there in the dark greatly outweighed my exhaustion. 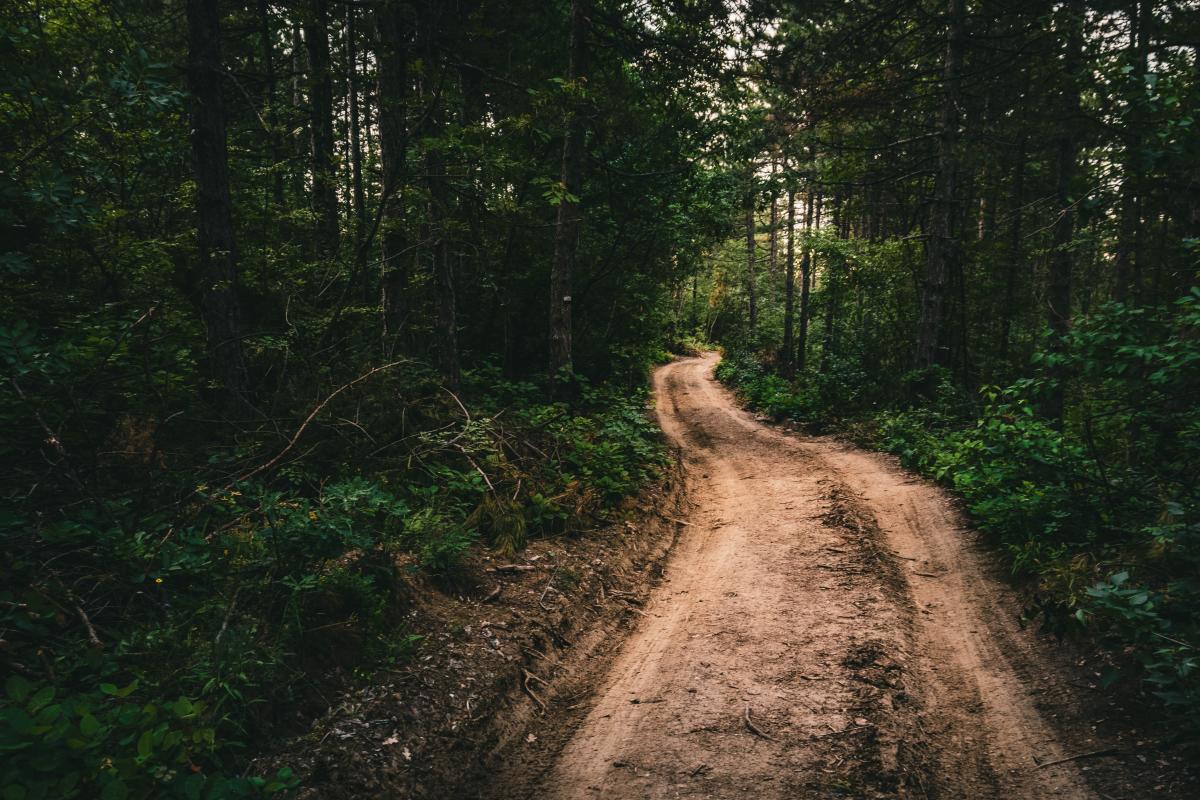 As we were riding down the mountain, I heard a loud snap come from my bike. When I stopped, I saw that my rack where I carry all my gear, like a sleeping bag and mat plus all my clothes and some snacks, had cracked. Eventually, we “fixed” it with some rope to make it good enough to get down the rest of the mountain. Another “exciting” thing happened on the way down, although we did not know until we got to the bottom. I had lost a shoe that was strapped onto one of my panniers on the way down, so I didn’t have any other shoes except my biking ones for a couple days. This wasn’t that bad since there wasn’t much to do in the small villages we were in, anyway.

We kept on going and did not stop, afraid it would get dark and then we would be lost. After hours of seeing no one and not talking, I was starting to question whether or not this whole bike trip was such a good idea. Why didn’t we listen to the other three old Bulgarian guys at the café? But then we saw this saint of an ancient woman. She was dressed all in black, hunched over her cane as she slowly wobbled up the road. She looked like the oldest person on the planet. At that moment, all of us thought, “Thank goodness! If that woman is walking by herself right now with nothing, we can't be far!” And we were right.

Right after that we pulled into a little village, but we still had about 30 km to go to the main town. Those 30 km (even though they actually weren’t that difficult) felt the hardest ever because we were so tired. When we finally got to the town, we were so muddy and disgusting that everyone in the town must have been giving us weird looks, but we were so exhausted that we didn’t even notice. First thing we did in town was go straight for food, which happened to be a fruit stand. We devoured pretty much everything at that fruit stand: pears, apples, peaches.

The next thing we did was look for a place to stay. We did have a tent, but that night we thought we wanted to have something a bit more relaxing. There was only one hotel in the village and it looked rundown and abandoned, almost like the building was going to fall over. Once we got there we had to stand outside and yell up at the building for people to come out. When they finally came out the first thing they did was ask us where we were from. When we told them we were American they talked together in Bulgarian and finally said it was going to be $50 (even though it was probably only worth $20) thinking we would pay it. My papa generously said he would pay $30, but they said no and we ended up with nothing. They seemed shocked, but we felt better about doing things our own way. We found a camping spot next to a river that we washed off in.

After stocking up on more food, cooking and enjoying a great dinner, all three of us could finally laugh about the decisions we had made. I knew that we would have more situations to come that would be uncomfortable and challenging. But we had survived this one, so I trusted that we would make it through the next adventure. That night I slept like a rock and didn’t even hear my dad snoring. We woke up the next day, promised each other to make better decisions as a family, and kept on going.

Damiano Rivera de Rosales is a student at the Paolo Freire Freedom School.