Join me and special guest the poet and the Literary Director of the Poetry Center, Diana Delgado in Studio 2B for a reading our favorite poems across generations. You’ll hear a vital sampling of poems from new collections (such as Kate Colby’s The Arrangements and Kate Greenstreet’s EP Birds in the House) as well as favorite poems from contemporary masters like Frank Standford and Jean Valentine. You won’t want to miss a soon-to-be classic from the Poetry Center’s Voca audio files, featuring a very special reading of a Tommy Pico poem by the poet Morgan Parker.

With music from Leon Bridges, George Harrison, and The Beasty Boys among others.

Kate Greenstreet |“Of a Year Not Given” and “What It Means to be a Stranger” from the EP Birds in the House, a companion to her book The End of Something, Ahsahta Press (2018).

Anne Boyer | an excerpt from “No,” A Handbook of Disappointed Fate, Ugly Duckling Press (2018). 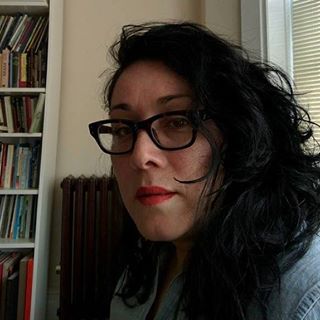 Diana Marie Delgado's first poetry collection, Tracing the Horse, is forthcoming from BOA Editions (Fall, 2019). She is the author of "Late Night Talks with Men I Think I Trust" (Center for Book Arts, 2015). She is a recipient of a 2017 National Endowment for the Arts Literature Fellowship in Poetry and has received grants and scholarships from the Frost Place Conference on Poetry, Letras Latinas, Hedgebrook and Bread Loaf Writer's Conference. In Summer 2018 she moved to Tucson to work as the Literary Director of the Poetry Center.