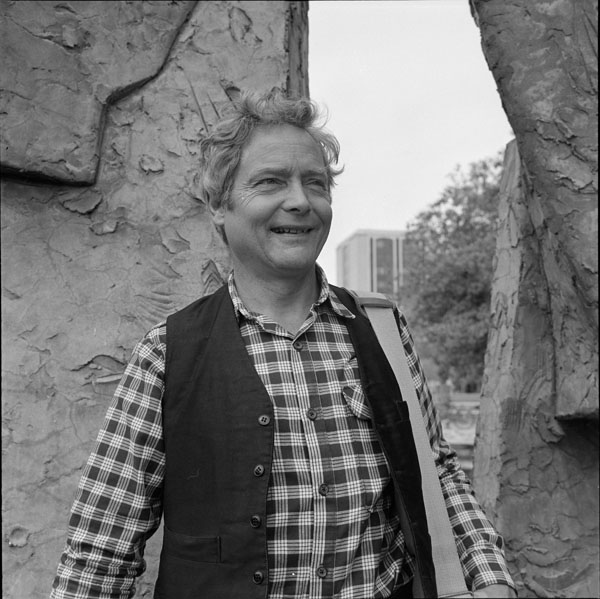 Our audiovisual archive, Voca, currently holds the work of 45 Pulitzer Prize Winners, 40 National Book Award Winners, 28 Poet Laureates and 4 Nobel Laureates in Literature. Today, I want to focus on the late W.S. Merwin, a prolific poet and passionate anti-war and environmental activist. Merwin’s poetry is inquisitive, lush, and committed to honoring the symbiosis we share with nature. Merwin was born in New York City and spent his childhood in New Jersey and Pennsylvania. The son of a Presbyterian minister, Merwin later converted to Buddhism. However, his Presbyterian roots are reflected in the devotional nature of his poetry. From the 1970s onward Merwin lived on an old pineapple plantation in Hawaii. He and his wife restored this plantation to its original rainforest state and one of the most comprehensive palm gardens in the world. You can read more about The Merwin Conservancy here. Merwin authored 30 books of poetry, 4 books of prose, 3 plays, and translated at least 20 texts. At the start of his career in 1952 Merwin was awarded the Yale Younger Poets Award; he was later awarded the 1971 and 2009 Pulitzer Prizes for Poetry, the 2005 National Book Award, and in 2010 was titled the United States Poet Laureate. W.S. Merwin passed away at the age of 91 on March 15, 2019, a beloved poet to many.

Merwin gave seven readings at the Poetry Center; his first was given in 1969, just nine years after the center was opened. Today I want to focus on the last reading he gave, which was in 2008, just two years before being named United States Poet Laureate. In his opening remarks Merwin contemplates nature, what it is and is not: “I don’t like talking about ‘nature’…The assumption has come to be that nature is something separate from us. As though we were not nature, as though the traffic problems were not a part of nature…as though the Iraq debacle were not nature, as though our bad behavior were not nature. Everything is nature. We’re not separate, we are not separate.” He goes on to explain that these have been core beliefs of his ever since he was a child, how he has always lived his life in awe of the earth’s primordial knowledge.

Throughout this reading Merwin offers us precious glimpses into his quirky and determined personality. There are so many small details to glean from this poet’s conversation. My favorite small detail was that Merwin began writing poems at five years old because he wanted to be able to write the kinds of songs he sang in church, which his father ministered. Merwin’s compassion for all living beings shines through in his poetry. In this reading he reads from three books: Travels (1993), The Rain in the Trees (1988), and The Shadow of Sirius (2008). Merwin begins the reading with a poem titled “One Story,” expanding on his conviction that life depends on interconnectedness and ending with the striking lines “so that when there is no more/ story that will be our/ story when there is no/ forest that will be our forest.” My favorite poem that Merwin reads is titled “By Dark” which features an omnipresent “black dog” who seems to be the courier between life and death. Before reading “By Dark” Merwin explores the tragedy of species loss and environmental decline and shares that our planet is now losing a species every few seconds. Merwin ends the reading with “The Laughing Thrush,” a lively poem of hope. Please enjoy.