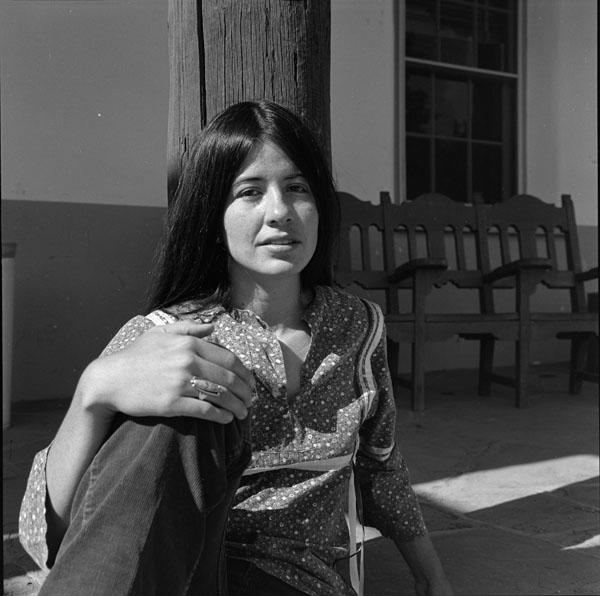 Our audio/visual archive, voca, currently holds the work of 40 National Book Award Winners, 45 Pulitzer Prize Winners, 28 Poet Laureates and 4 Nobel Laureates in Literature. Today, I want to focus on Joy Harjo, a poet who has read at the Poetry Center four times between 1987 and 2017. In 2019 Harjo was named the first Poet Laureate of the United States of Native American descent.

One of my favorite things about Voca is the ability to listen to recordings of poets early on in their career, before their work garnered much national or international recognition. For some poets who have read at the Poetry Center multiple times, like Joy Harjo, we can follow the arc of their career and observe how their work has changed and matured over the years.

My second favorite thing about Voca is how intimate the readings often are. Harjo’s 1993 reading is particularly special because it is rich with Tucson-specific backstory and a variety of forms. In this reading we are treated to a rendition of “Warrior Road,” a short essay (a rare occurrence since Harjo is best known for her poetry) from Reinventing the Enemy's Language: Contemporary Native Women's Writing of North America (1997). In this story she describes both her and her daughter’s troubling birth experiences as Indigenous women under the American health care system. Parts of this story take place in Tucson and, in it, Harjo shares with us how she named her granddaughter. Sandwiched on either side of “Warrior Road,” Harjo reads two poems: one, a love poem and one, a poem that is technically a song written for her former five-piece band called Poetic Justice. Please enjoy this reading and don’t forget to check out these portraits of a young Joy Harjo taken by the Poetry Center’s first director, Laverne Harrell Clark.