The first time I read “The Mysteries,” by Catherine Pierce, I was lying on my back with my legs on my couch. It was right after my birthday, and I had sprained my ankle on my birthday, so I was reading and trying to get the swelling down. It was deep into the pandemic, September of 2020, and I was feeling isolated and annoyed at myself for somehow getting injured even with nowhere to go. I got to the end of “The Mysteries,” and tears were creating little rivers over each of my temples and into my ears. I read it again and again on the floor and kept crying.

Let me solve one of the mysteries in Catherine Pierce’s poem. In it, she writes:

I still carried fear,
but there were these long moments
of slanted light and far-away trains sounds
or constellations above a slow, wide river
and those long moments held the part of me
that could say yes to things like ghosts
and prayer and the belief that desire
could move people like chess pieces.

I was born in PA, in Harrisburg, in a hospital that overlooks the city’s seven bridges over the Susquehanna River, the same river my alma mater is named for. I lived in Harrisburg until college, when I moved to Selinsgrove to go to school at SU. Some mornings, I would walk the three-quarters of a mile from my house to the Isle of Q and sit on a bench to watch the sunrise over the river, to see that “slanted light” cut through the fog. 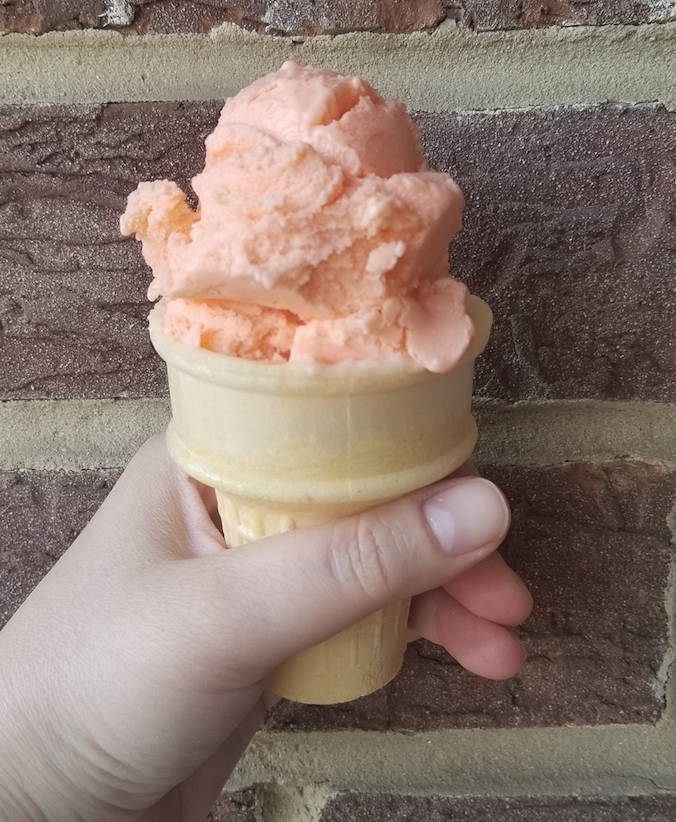 I haven’t spent any time in PA in over a year, now, since before the pandemic times. I live in Maryland and, even though it’s just less than an hour to the Mason-Dixon Line and about two to my mother’s house, I have stayed sheltered in Maryland. In a lot of ways, Maryland isn’t all that different from PA. We have four seasons; the time zone is the same. And yet, there are some things in PA I just can’t get here, most of them related to the PA Dutch culture. No one, for example, cooks pork and sauerkraut for good luck on New Year’s Day in Maryland. If I say, “Wow, it’s slippy out today,” people correct me and say, “Do you mean slippery?” (I don’t.) Even referring to “Pennsylvania” as “Pee-Ay,” which I do in speech nearly exclusively, is a mannerism that doesn’t cross the border. And on a hot summer day, there’s not a single place where I can find teaberry ice cream.

The teaberry (Gaultheria procumbens) is a plant native to North America—a low shrub with hard little red “berries” that smell of wintergreen. Teaberry as a flavoring has largely fallen out of fashion. Clark’s made a teaberry gum that they discontinued in 2016. Teaberry ice cream can be found at a few places. 3B, the local Harrisburg ice cream chain, has it. Weis sells half gallons of it under the store brand. Finally, while I’ve never had it, Penn State’s famous ice cream shop, The Creamery, carries a teaberry flavor. And, unfortunately, you may have tasted something similar to teaberry yourself: Pepto Bismol is noted for having the same flavor and the same pink hue.

In “The Mysteries,” Catherine Pierce writes:

I, too, want to hold this part of PA still. So badly do I miss being so close to the river— Catherine Pierce’s and my river—that I got it tattooed on my chest, with Harrisburg and Selinsgrove stationed right over my heart. My tattoo artist, Todd, inked it in November of 2019 in a shop in Duncannon, right by the bridge over the Susquehanna I crossed so many times as I went between Harrisburg and Selinsgrove. But of course, I was foolish to think I could keep a place, if not static, then still. Especially foolish to think this of a river.

Kenny, my husband, knows how I ache for these things and so, for my birthday this year, he made me teaberry ice cream. He somehow hid our Kitchenaid ice cream bowl in the freezer and, while I slept, cooked cream and eggs, cooled the mixture, and ran it through the machine. When he handed me a bowl (for breakfast, no less!), the first bite tasted like he had solved a mystery.

Teaberry ice cream is pink, and it’s minty. The pinkness is surely from dye, and this part my husband flubbed; too afraid to make it red, he ended up with an ice cream that was basically white. But the mintiness! While I always prefer a softer wintergreen to the sharper peppermint, teaberry ice cream had something else there, something I could only ever describe to outsiders as a roundness. In fact, describing teaberry ice cream often eluded me. “It’s PINK,” I’d say, as if the lushness, the softness of the color could convey not just the flavor, but the feeling.

There’s only a handful of recipes online for teaberry ice cream. All call for teaberry extract, which Kenny had purchased, also surreptitiously. But Kenny had seen one single recipe that also added vanilla extract, and so he had added that too. That was it: the key that unlocked the feeling of home for me: the feeling of playing frisbee and going to 3B at 18 and eating teaberry ice cream with my boyfriend’s arm around me and then. At 19, of eating it after he had left me for my best friend, when I was eating pretty much only avocados and teaberry ice cream. Of introducing Kenny to teaberry ice cream in college even though it was maybe too cold for ice cream that day. Of sitting in the dark in summer with a moon overhead, and of Pennsylvanian humidity wrapping me in her embrace.

At the end of “The Mysteries,” Catherine Pierce writes, “It seemed possible / to be so much a part of this place / that it would never let me go." But it did. Selinsgrove will likely not welcome me back anytime soon. Every time I return to Harrisburg there are less people that confirm plans to visit, that recognize my face as I wander up and down Riverfront Park. But I can take parts with me. The river will always be on my chest, and now I can have teaberry ice cream anytime I want. In some ways, because it was Kenny, my love, who figured this out for me, when we make it together, it will be even greater than returning home.

Make the custard. In a small pot, simmer milk, cream and sugar over medium low heat until sugar is entirely dissolved. Turn off heat. Beat egg yolks until smooth. Then, stream about a cup of the cream mixture very slowly into the eggs to temper them. Then, pour yolks back into the pot with cream and heat slowly until the mixture thickens, stirring pretty much constantly. A good rule of thumb is that a finger run through the mixture on the back of a spoon will hold a trail.

Strain the custard and chill. Strain the mixture into bowl or jar. Set to chill in the fridge until fully chilled, preferably overnight.

Flavor and color the custard. Before churning, stir in extracts and salt. Taste and adjust if needed. Then, mix in food coloring until desired lush pinkness is achieved.

Churn according to manufacturer’s instructions. Follow the instructions in your ice cream maker to churn. Then, transfer to a container and freeze until fully set.

Elizabeth Deanna Morris Lakes was born in Harrisburg, PA and has a BA in Creative Writing from Susquehanna University and an MFA from George Mason University. She has appeared in The Rumpus, Cartridge Lit, Gulf Stream Lit, Crab Fat Magazine, and SmokeLong Quarterly. Her book, Ashley Sugarnotch & the Wolf, is out from Mason Jar Press.