Yesterday, I saw the fattest robin I’ve ever seen; it ambled, skipped, then flew. Something about the full shape of its rust-colored belly made me smile. These small, simple moments remind me of Alfred Starr Hamilton, a poet, who knew how to spot delight and coax it onto the page. His poetry is not well known. In fact, during his lifetime he only published two chapbooks, Sphinx and The Big Parade, and a book, The Poems of Alfred Starr Hamilton, that sold so few copies it quickly went out of print. I learned about his work when a small press called The Song Cave released a collection of his, titled A Dark Dreambox of Another Kind—a line culled from one of his poems.

Alfred Starr Hamilton was born in 1914 and died in 2005. His biography is as distinctive as his work. For a time, he held down a job filling gumball machines in shops around Montclair, New Jersey. He had a black cat named Anonymous. When his mother died, he stopped working, and lived on a modest inheritance of $1000 a year. A solitary man, he typed up thousands of poems on a manual typewriter. He mailed weekly batches of around forty-five pages to one magazine, and one magazine only—Cornell University’s Epoch. Editors were befuddled by his output and many of the poems began to pile up in boxes at the office.

The cover of A Dark Dreambox of Another Kind, shows Hamilton dressed a bit like Mr. Rogers but bearing an impish grin. His arms hang loose at his sides, and his shoulders are rolled forward like he’s about to give the photographer a polite bow. Behind him on a table is a single countertop burner with a tea pot on top. There’s an ashtray and what looks to be a bag of tobacco. Like his humble abode, his poems also have an orderly plainness, bearing titles such as “Thursday,” “Apple,” “Summer,” “A Crust of Bread.” I chose poem titled “A Carrot,” because it still mystifies me every time I read it.

I wanted to find a little yellow candlelight in the garden

A single unbroken line. I love it for its aspirational charm, its absence of punctuation—the way the poet’s desire is so unlike any other sort of desire I’ve seen articulated in poetry. I picture him on an evening walk, spotting the carrot and being struck by its luminescence. It reminds me of another night-time wanderer, Wallace Stevens, whose poems are also bathed in moonlight and filled with peacocks waltzing around in the velvety night. For these two poets, nature radiates various frequencies of light. We’ve all seen it—a cat’s eyes glowing in the dark, the flick of the white tail of a deer like snow against shadowy a backdrop of birch trees.

Hamilton’s poem showcases a tender optimism. Does this line mean, “I wanted to find a little yellow candlelight in the garden” and I did? Like so many of his poems, an object, in this case a carrot, sparks something—perhaps due to its gentle, divine charm. He once wrote, “Poetry is the story of the soul” and that we are at our best when our “psyche is free.” He is free from worrying about whether this one line has one too many modifiers. Without “little,” and “yellow” the poem would lose its vulnerability—its happy stumbling effect.

“Art is poor,” Hamilton once said. “The best things are never to be had for riches.” He lived on a budget of $80 a month, cooked his own meals, and wrote poems.

When I wonder about what kinds of foods he enjoyed, I imagine they consisted of easy to heat items on a single burner—a can of soup with some crusts of bread. I ran though recipes with carrots: carrot cake, roasted carrots with garlic, but settled on something I believe he might have found fun—carrot fries—a simple way to turn a vegetable into a finger food and a nice alternative to French or Sweet Potato fries. 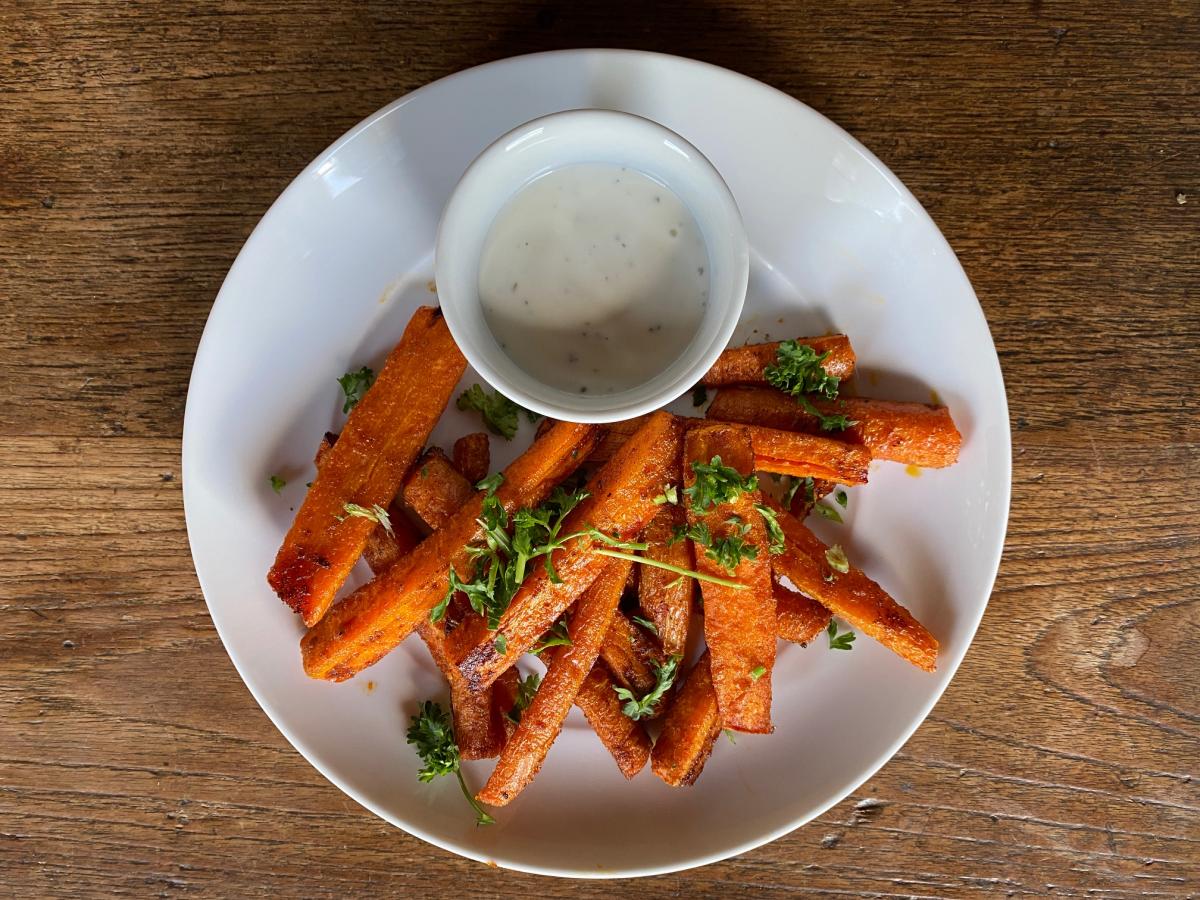 a pinch of salt and pepper

2. Wash carrots and cut off the ends. (Note: I didn’t peel the carrots because there’s really no need to.) Cut carrots in half and slice again down the middle.

3. In a mixing bowl, mix together the olive oil and seasonings.

4. Place carrots in the mixing bowl until they’re nicely coated.

5. Place carrots on a large baking sheet with a nice amount of space between them.

6. Bake for 20 minutes, turning the carrots half way through.

7. When carrots are done, plate them, and sprinkle some fresh parsley on top.