This month, I spoke with visual artist Ron Kovatch about a project he's undertaken at a Poetry Mailbox installed in Tucson in the Broadmoor neighborhood. The Poetry Mailbox is the brainchild of poet and Urban Poetry Pollinator Elizabeth Salper: it's set up as a public art installation where neighbors can leave poetry for one another. 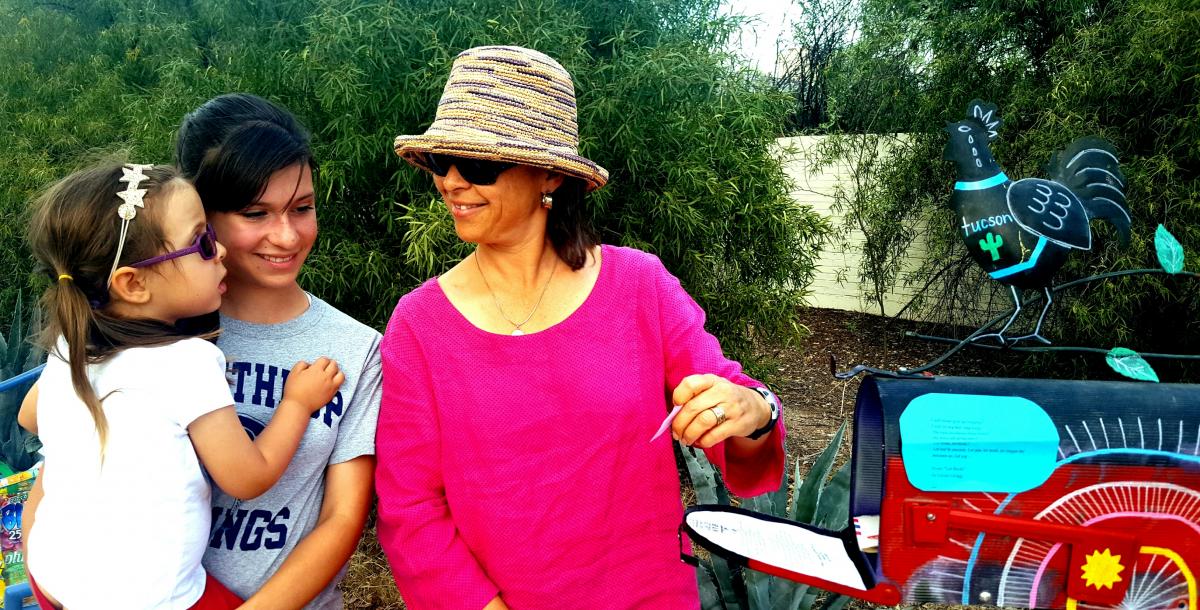 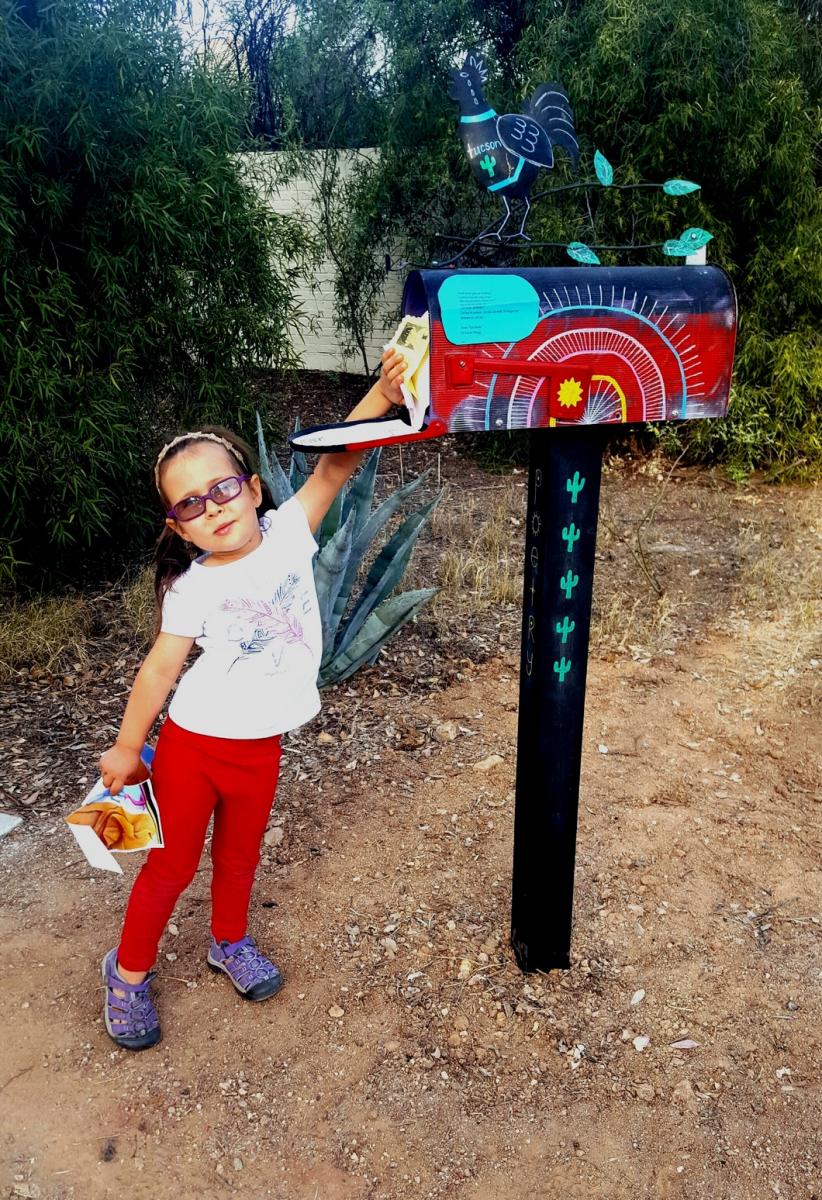 Photos of the Poetry Mailbox by Elizabeth Salper.

This interview has been edited for length.

Sarah Kortemeier: What do you love about Tucson, and about poetry?

Ron Kovatch: Those are really connected questions! I lived in the Midwest all my life, and as a kid I always wanted to see the saguaros. The first time I came here, I drove over Gates Pass, and I said, "I'm moving here." My wife and I fell in love with Tucson, its beauty and its extremes. I wanted to be challenged: I don't think an artist should be comfortable in their studio, pumping out wares. This environment supports creativity. When I see a palo verde beetle walk by, it's three inches long and I'm distracted by it in a wonderful way. As for poetry: the Poetry Center opened a door I didn't know was there. I've always written, but I never took it further than thinking seriously about the title of a drawing or a sculpture. When I came to Tucson, everybody I met was a poet or an artist. I went to a reading at Casa Libre that Elizabeth [Salper] gave and I had great reverence for her work. But up until I moved to Tucson I didn't own a book of poetry. A friend gave me a book of Jim Harrison's poems, telling me, "this guy speaks your language," and I related to it.

So when Elizabeth started the Poetry Mailbox two minutes away from me, I started to walk by and put in fragments from books I was reading. Short fragments really appealed to me, and I'd put some of those fragments combined with material from my studio into the box. I put a postcard in the Poetry Mailbox for a friend and told her I'd planted it there, and I became addicted to doing that. I looked at old drawings, and sometimes I'd cut them up, and I'd make postcards out of them combined with pieces of text. I get smarter when I make works on paper. I like what happens. It's almost like you trip into it like a mud puddle and the stain on your pants is exactly what you need--the work takes you around a corner, and is better than anything I could contrive ahead of time. 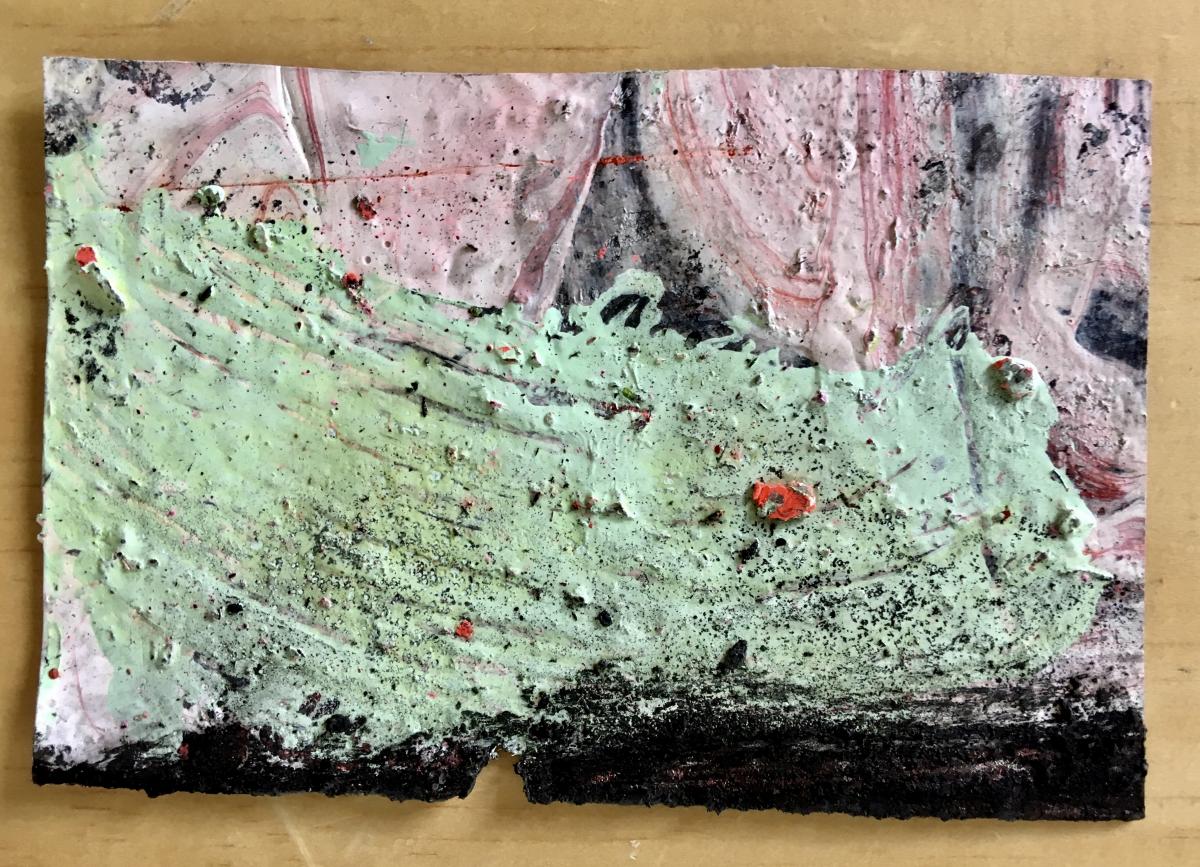 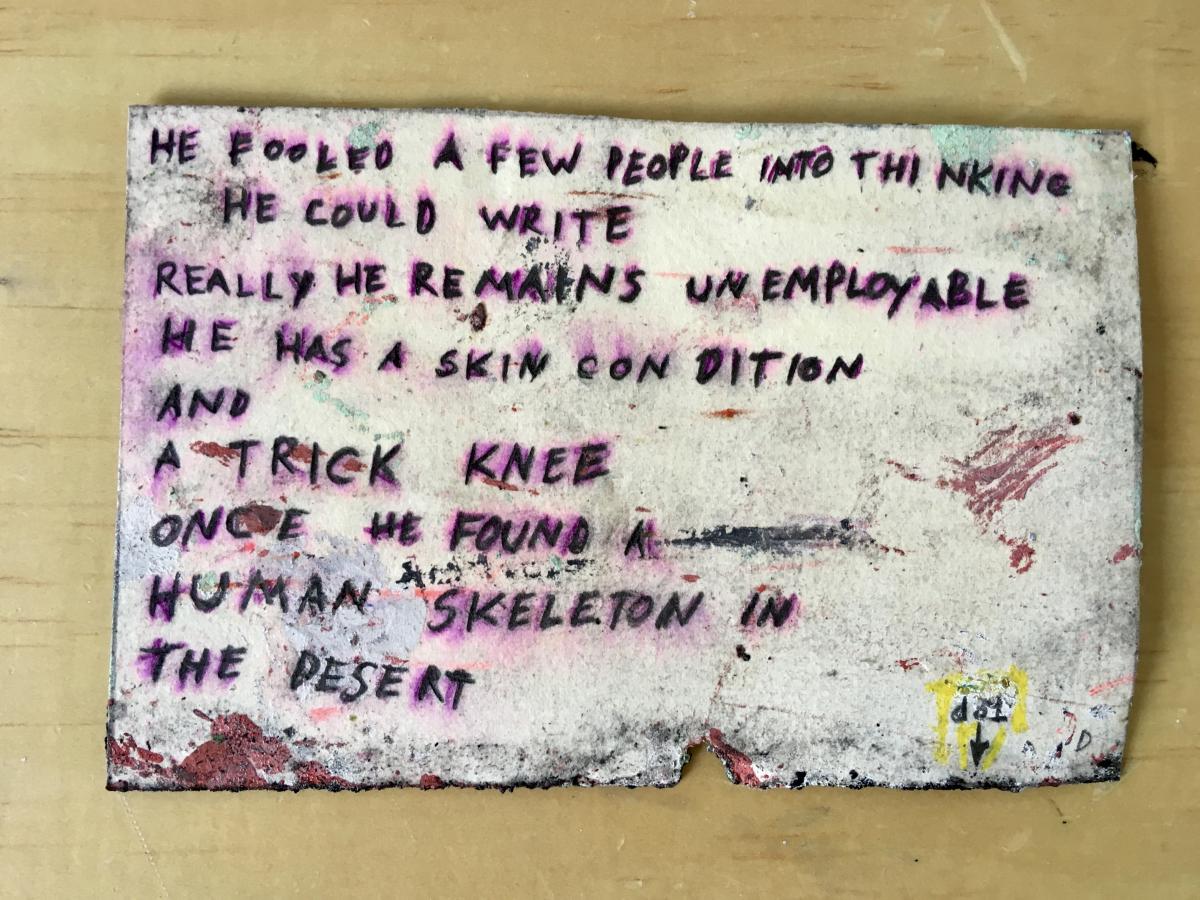 SK: How did you get started with your current project?

RK: I have three ledger books from 1921-1923 I bought in a junk store. The paper is big and beautiful, and I think it's all done by the same person, in the same hand. The handwriting is beautiful. I've done some collages and drawings on some of it; there's something precious about it. Someone cared.

This project started with a poem about my mother. I had a hard time dealing with her passing, and I wrote a poem about things that don't connect but that I attribute to my mom, and I remade that poem on ledger paper for my brother. Now I place pieces on ledger paper in the Poetry Mailbox about once a week. I plan on continuing this project as long as I have the ledger paper. 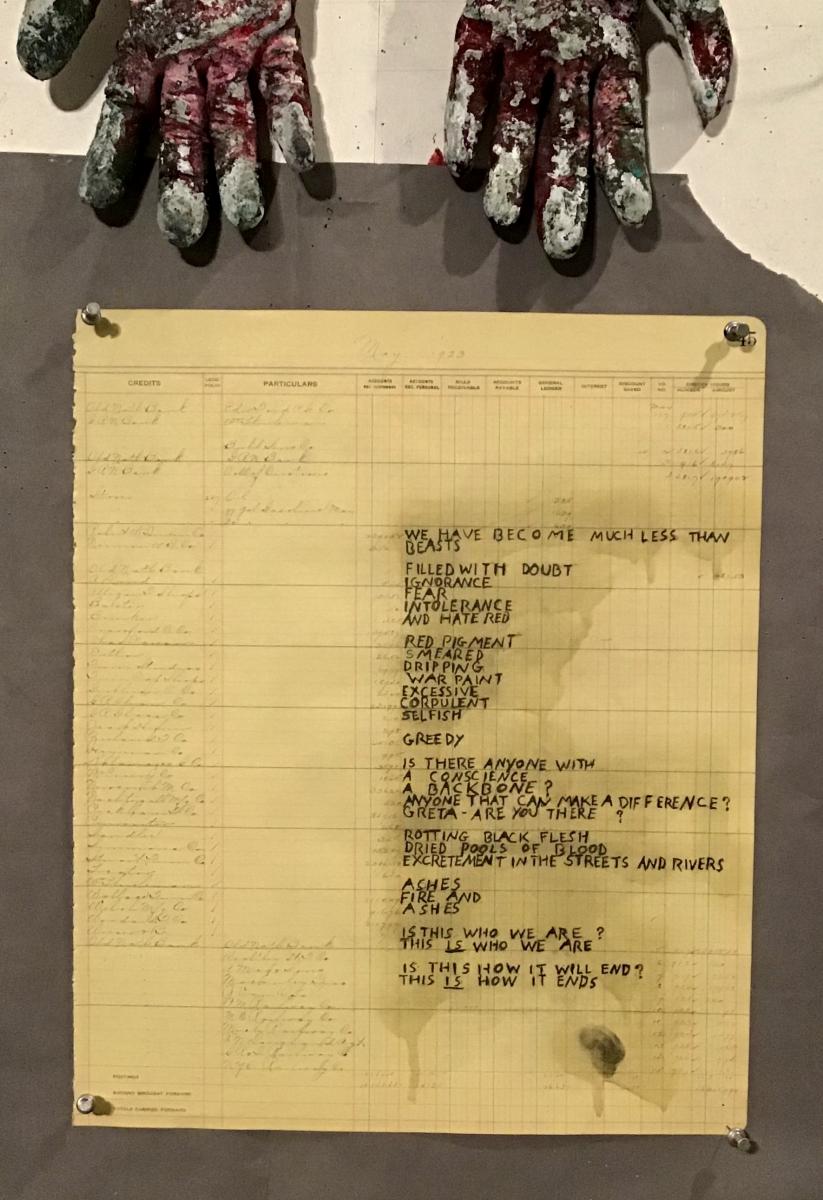 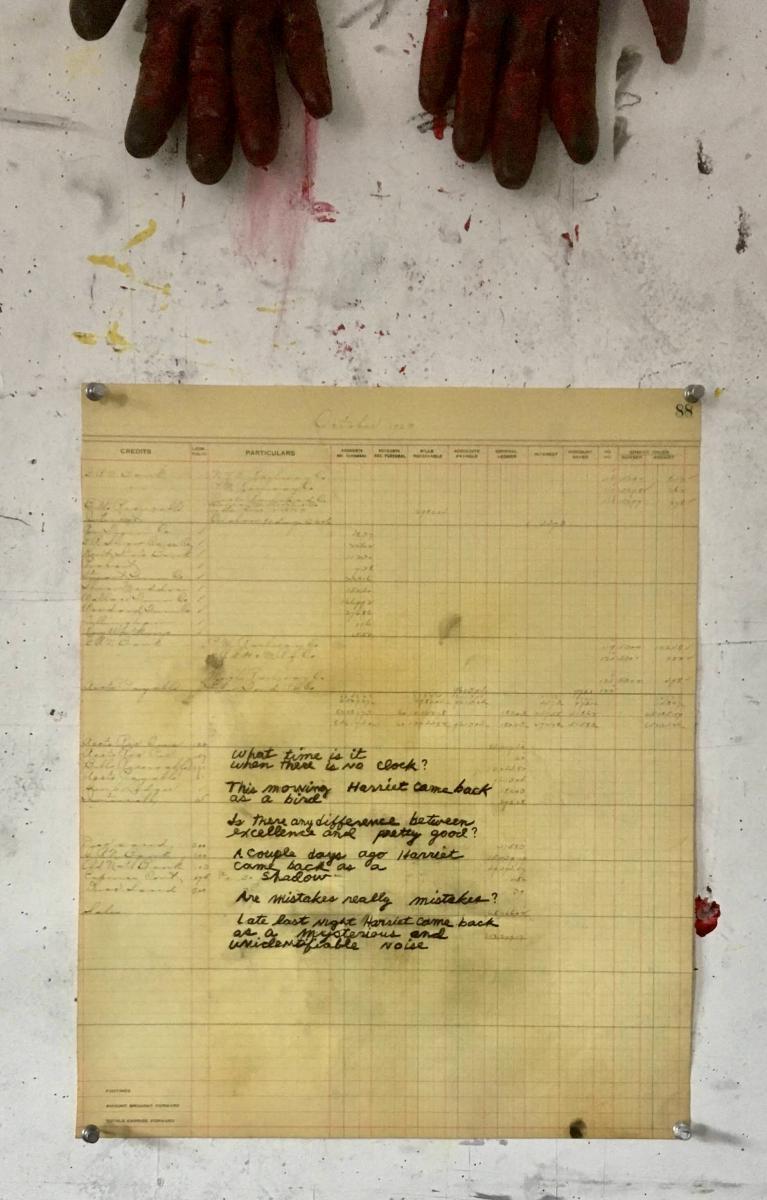 Two ledger-paper poems by Ron Kovatch. Kovatch submits these to the Poetry Mailbox anonymously. He signs them only with a thumbprint, saying, "I want the person who finds it to think of it as a gift, but have no idea who to thank." Kovatch usually includes his working gloves, stained with material from countless art projects, in photographs of his ledger-paper poems: the gloves, he says, have taken on a life of their own, imbued with the work. When paired with the poems, he says, they create a "marriage that [he] like[s]." Photos by Ron Kovatch.

SK: What has surprised you most as you've worked on this project?

RK: This project is a risk for me, as I'm not educated in creative writing. I didn't realize I had this inside me. This project becomes part of my identity even if I don't formally put the pieces out there. As a professor [Kovatch taught art for many years at the University of Illinois at Champaign-Urbana], you make your art, you have a show in a gallery or a museum, and you publish or perish. Because I don't have that kind of ambition anymore, there's a certain freedom. I'm not as well read in poetry as I'd like to be, but I'm working on it, and I feel there's an urgency to express myself in these two forms. It's like I've been doing it all my life. It can still be surprising and gratifying and confusing and challenging, and if nobody sees it, it doesn't matter to me.