Every time I think of Flagstaff I get brain freeze, but a warmth also overwhelms my body when I read and hear its literary voices. It was an honor to be invited as a poet to the renowned Narrow Chimney Reading Series organized by Jesse Sensibar and James Jay. The poetry readings are scheduled for Monday nights at 7:00pm and are held at the Uptown Pub House.

I  was co-featured with Flagstaff poet, Levi Phillips.  It was a privilege to read with Levi and the Narrow Chimney audience. Shortly after 7:00pm,  I opened the door and the sound of poetry and the chatter of glasses and pool balls spilled out to meet me at Uptown Pub’s entrance. It was hard to ignore that the large crowd was enraptured by something.  I looked over the audience to see what was captivating their attention and noticed a young man in a Black baseball cap behind a wooden podium preaching his psalms of poetry.

As usual before a reading, my nerves squeezed my heart and mind in a vice of nervousness. But listening to Levi loosened my jaw and helped me finally find room in my chest to breathe. His poetry’s personal narrative offered a different perspective on the world. His words easily popped the bubbles of people who live a life sheltered from so-called abnormal society.  His poetry encourages the world to take off their shoes and walk in those of another for at least the length of a poem.

After we both read, Levi walked toward me, his spirit preceding his physical body. As he came towards me I felt like I was meeting an old friend.  It was nice to feel welcome after not seeing anyone who had a darker skin tone like mine. Levi’s smile and joy were like his poetry and washed away any fears I had. We sat late into the night discussing our writing process and how our lives intersect with our art. While sitting there, I struggled to figure out how I would remember the night’s poetic adventure. We continued to talk about our day jobs and writing lives and then suddenly Levi surprised me with a copy of his chapbook, “Tired Poets Never Really Rest.”  I fingered through the pages. Scanning the poems I easily heard his voice read his poems  like he did that night.

Recently I took advantage of our digital world and decide to send a few text messages to learn more about Levi and his art. 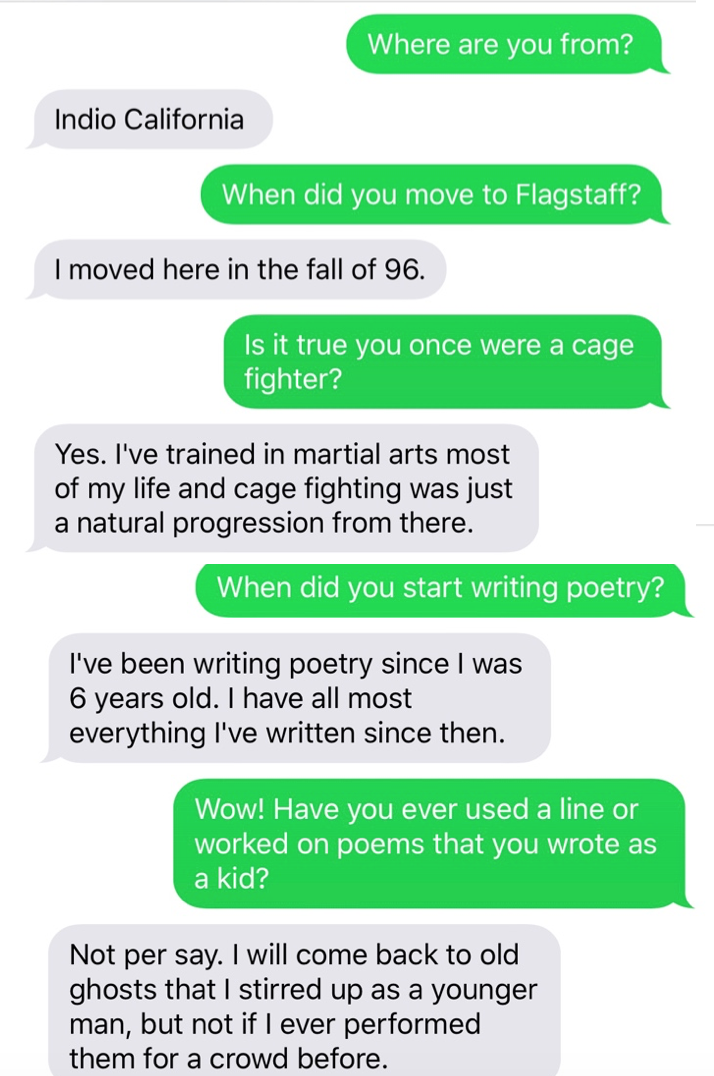 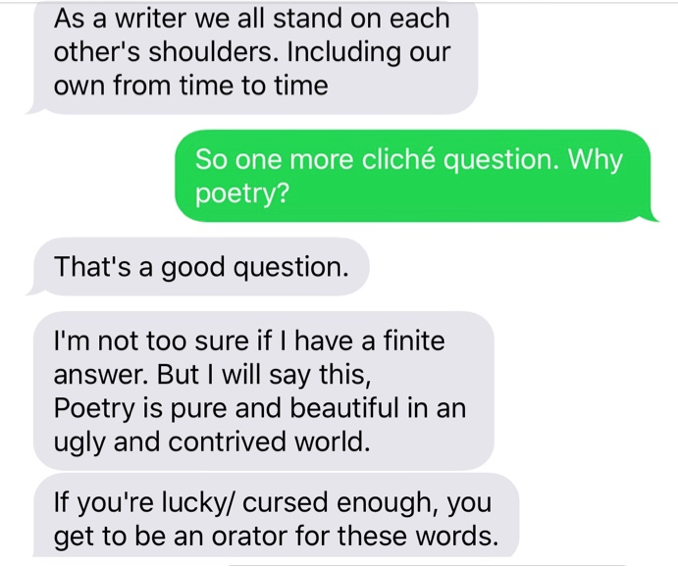 I have two Levi’s chapbooks, “Tired Poets Never Really Rest,” and “Man on Fire” on my bookshelf.  I browse my poetry collection when I feel alone and I usually end up pick up one of his chapbooks.  His work reminds me that inner demons can be released by putting ink to scroll or by typing an avant-garde composition on a computer’s keyboard.  The reader can free themselves from their own battles and empathize with another person’s fight to transform demons into gifts that maintain mental health and sobriety.

Zen and the Art of Outlaw

I’ve not come across too many poets that are able to be vulnerable and share their personal narrative, beliefs, thoughts, and life’s love and struggles.

Because, I’ve been a lot of things

A dreamer, a drunk, a junky, a promise, a pain,

Son of a preacher man and a son of a bitch.

And stain you beautiful

Levi’s work draws you into the murky haze of logic and emotions and slowly speaks in voice not often heard.  He shares his voice with the silent who have been demeaned and thrown away into the prison of their war against vices.  I honor voices like his because it’s not often you feel a poet is reading the same palms you write with. 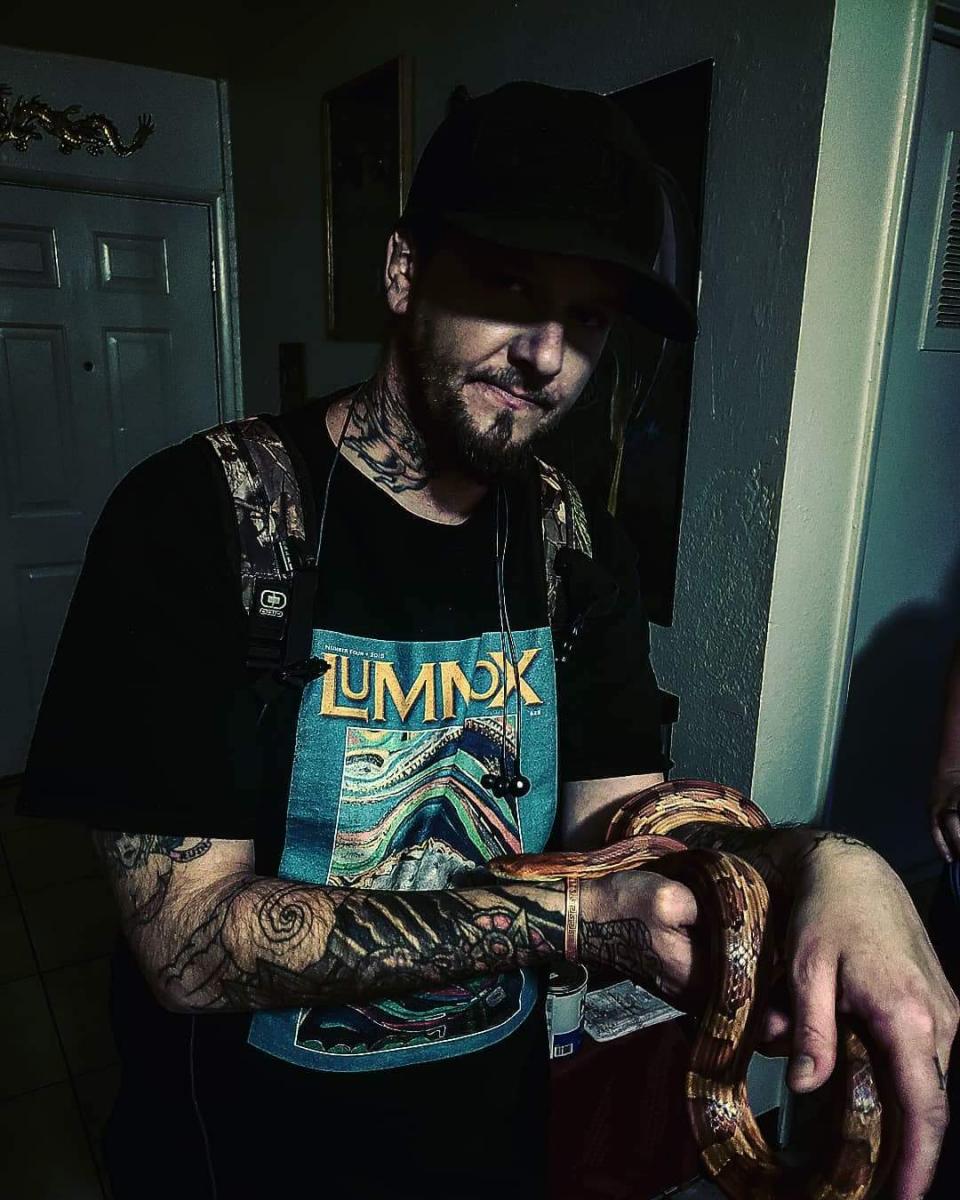 Levi is a street poet through and through. Half mad man, half saint. His influences are varied, but include hip hop, street art and the general human condition that plagues us all. He prefers to delve into the touchy subjects. Love, addiction, mental illness and the things that he has been affected by. Writing has always been a natural catharsis for him and he views it as a form of "therapy", and not so much an art. As a poet he feels it is his job to show his vulnerability.