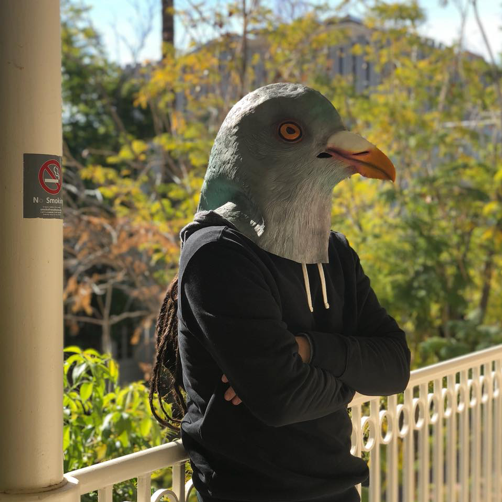 Next time you see pigeons on telephone wires, or on your roof pecking at the owl that's supposed to scare them off, take the time to observe their actions. Notice their different colors, the way they change in the light. In Phoenix, we often see the blue-grey pigeons. But if you look more closely, you might become aware of their different shapes, sizes, colors, and come to see the beauty of these wild-rock or feral pigeons.

Rock pigeons are those omnipresent beings that observe the world from telephone wires.  The next time you see those pigeons, usually traveling in twos, think of Joel Salcido. He thinks it’s unfortunate that we see pigeons as a nuisance, and he uses a surreal symbolism to explain why. He argues that, like pigeons, society sees Black and Brown people living in ghettos and barrios as nuisances. The ghetto and barrio are also avoided because these “pigeons” destroy their own dilapidated communities. But one man’s trash is another man’s treasure.

Joel Salcido was born a Los Angeles a homing pigeon, a derivative of the Rock pigeons, who found his home on Westside of Phoenix, where he transforms the gospels of the barrio into Surrealist prophecies. He is blessed with a beautiful wife and sons.  He is part of a dropping of talented brothers, friends, co-conspirators and fellow hood revolutionaries. He is also a student in Arizona State University’s Master of Fine Arts Creative Program. He is building spaceships out of straw, sticks, and editor’s rejection letters to glide back to the moon with his feathered ARTRATs, and he has chronic illness. Poetry and prose are his languages, painted for the viewers and etched in the psyche of the reader. He makes the invisible visible through a self-portrait of the city he protects with his feathers. 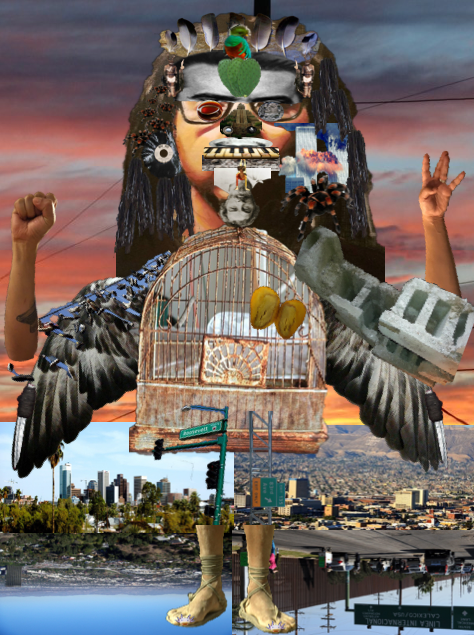 Again you are there      skinny as a streetlight

your flightless chest fluttering with every breath          like a rusted bird cage.

Skin of an ancient skeleton,

of chiles roasted in the dusk,    of an uneaten aguacate,

with skin of a sarape dragged through the desert,

of a light roast café spilled on an immaculate white T.

With long arms hanging like phone lines         weighed down by knock off Nikes,

wrapping around your loved ones        like a neglected cactus.

Hands with bent fingers of charred wire hangers         holding tightly to every nothing.

With nose wide as nopales that mound like weeds,

nariz of ruined pyramid           each nostril a dilated eyehole

for starlight to align and inhale.

I’ve lead you to the Gospel of Joel.  Now it’s up to you to follow the footprints to the moon and find the answers to the barrio parables.

Joel’s poetry will turn you upside and spin you on your head until you see images and the colors of the rings of Saturn.  When you are done spinning to the end of his poems you will understand that pigeons are not only pigeons, but that they are also doves that shine the light on the ugly transformed into the beauty of barrio life. 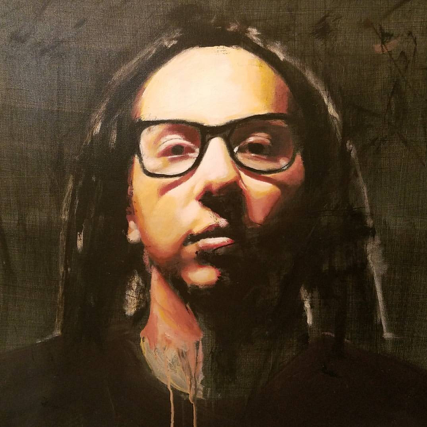 Joel Salcido was born in the San Fernando Valley and raised in West Phoenix. He is the son of Mexican immigrants, a first-generation college graduate, a husband and father of three sons. Joel characterizes his work as hood magical realism—a navigation between the grief and ecstasy of place and experience. His poetry and prose are not simply written to or about his culture and community—but from it. His work has been featured in Write On, Downtown, Public Pool, The Decolonizer, and Four Chambers Press among others. He is the recipient of a University Graduate Fellowship from Arizona State University and a Virginia G. Piper Creative Research Fellowship. Joel is the incoming Editor-in-Chief of Hayden’s Ferry Review and an MFA candidate in poetry at Arizona State University.