Tonight, I’m among family and friends to celebrate our guest of honor, Phoenix native, Eloisa Amezcua, and the release of her first full collection of poetry, From the Inside Quietly.  Upon entering the intimate venue, my wife and I were introduced to two people who have significant roles in the collection’s verse: Eloisa’s mother–the storyteller, and her father–the psychiatrist.  There is a sense of fulfillment when I meet these two people whose portraits I came to know closely on the page.

The house vibrates with smiles, chatter, the exchange of conversation.  I stand in the corner listening to each person approach Eloisa and ask excitedly, “Are you going to read tonight?” I joke how poets are transformed into DJs; dancers requesting they play their favorite song. I’m not sure how any reader could pick a favorite poem from this LP.

Eloisa responds, “I’ll read in about 15 minutes.” In anticipation of her reading, the crowd grows restless. Thirty minutes later, she finally opens to her loved ones.  Family and friends’ eyes glitter with anticipation.  The women all sit on couches surrounding the guest of honor.  The men stand patiently.  The women's powerful presence is as visible in the room as it is in Amezcua's From the Inside Quietly.

Eloisa gracefully thanks everyone for coming and softly begins to read:

“THERE WAS NOTHING TO DO BUT HURT EACH OTHER IN A PLACE LIKE THAT.”

We drive the back roads deeper

Listening, my ears nonetheless fade to the first time I heard Eloisa read. (Editor's note: you can view this reading here.)

Her first words, then, struck me. “This is my first post-election poem that I’ve written that I would put in a baggie and place in the ground."

“WHEN MEXICO SENDS ITS PEOPLE, THEY’RE NOT SENDING THEIR BEST”

Line 1: My father is not a rapist

Line 2: Or a drug trafficker or a criminal or a killer or a rapist (12x)

My mother is not a rapist

I am not a rapist

When America elects a president, they are not electing their best (13x)

Though they’ve not yet begun to hear me scream

The poem’s beat caught me off guard, its rhythm driving its lyrical point into the audience.

I faded back into the present moment listening.

She tells us that her siblings —

threw her in a pit

one morning. They all called her pollita

From the Inside Quietly defines love, but doesn’t set boundaries for its definition.

Repeatedly, Eloisa’s work makes me ask myself, whether love be political.

From the Inside Quietly shares intimate stories some writers would have reservations sharing. The poems contemplate identity, relationships, history, political debates, pop culture and love. She’s a Mexican-American woman pulled by Mexico, not wanting to betray her roots, but also being pulled the opposite direction, by America, simply trying to see where the center of her heart will choose and win the tug-of-war. Her courage is inspiring.

She captures a generation’s woman’s fresh cerebral and visceral voice in each story’s vignette.  There are common themes throughout the collection: women’s fear of male violence, colorism, intimate love with an ex-partner, and the unconditional love told through the woman’s body and family stories.  Screams reflect into the reader’s eyes from the inside and pushed into the chilling dark like the poem, E WALKS HOME ALONE: AN INNER MONOLOGUE.

to stop and punch

Eloisa’s storytelling and dark humor will envelop you as the reader, and her poems display a strong sense of agency.  Even though the collection is amassed with short terse poems that may leave you feeling heavy, there’s a sense of being weightless and warmed by light and joy.

Tia Imelda stabbed her in the knee

with a pair of dull scissors.  And mother

hesitates to tell me what her sister

the rusted bladed into her small body”

Her family and friends' laughter snap me back to the present.  I realized I’d been hypnotized by a poetic memoir that could’ve been my own.

I rewind and fast-forward in time with each poem as if I have found my favorite song, though I can’t decide which was my favorite. I believe this collection will be the first of many to go platinum. 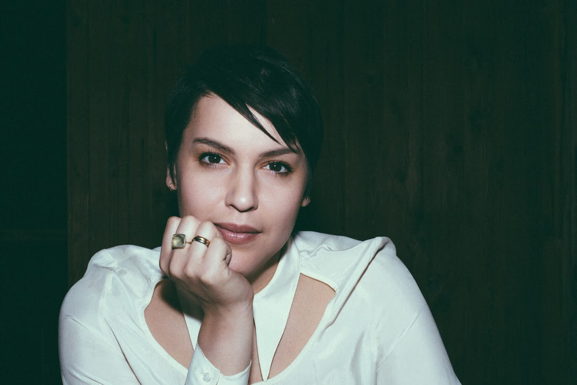 Eloisa Amezcua is an Arizona native. Her debut collection, From the Inside Quietly, is the inaugural winner of the Shelterbelt Poetry Prize selected by Ada Limón. A MacDowell fellow, she is the author of three chapbooks and founder/editor-in-chief of The Shallow Ends: A Journal of Poetry. Her poems and translations are published or forthcoming in Poetry Magazine, Kenyon Review, Gulf Coast, and others.