Michael Rosen is a mainstay in British schools. One of the most beloved British poets alive, he held the prestigious title of Children’s Laureate from 2007 to 2009, has written over 140 books and shows no signs of slowing down. One of his most famous titles, We’re Going On a Bear Hunt, was the subject of a Guinness World Record attempt for “largest reading lesson” in 2014, and even influenced a rise in “bear hunts” in the US during the COVID-19 pandemic, as people hid bears across their land for local children to find. 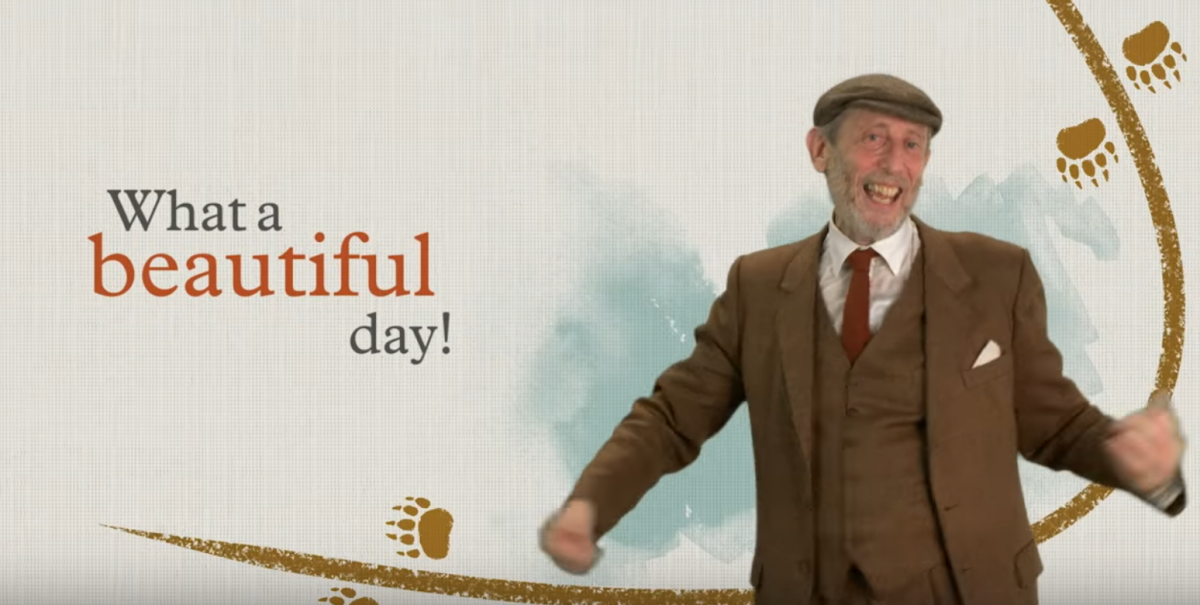 He’s well-regarded as a poet--perhaps the first to spring to mind when thinking of children’s poets in the UK--and it’s no surprise that he’s loved by so many teachers. He’ll often make appearances in schools, and it’s difficult to say whether the children or the teachers get the most enjoyment from it.

As any English teacher will testify, it can be difficult to get students into poetry. How do you make it appealing to a bunch of reluctant 10-year-olds in a post-Wimpy Kid literature landscape? Poetry is often typecast as quite "dry" and tedious--the idea of teaching some of Shakespeare’s sonnets to children who have barely hit their double digits is enough to send shivers down the spine of even the most hardened educator.

Nonetheless, Rosen wasn’t content with merely writing poetry, instead taking to video too. When Rosen found one of his books was out of print, and was unable to find a new publisher, he took to YouTube, getting his son to record him performing his poetry in an interactive, spoken-word style. He’s the sort of person who is naturally comedic, with a silly, often physical humor loved by children everywhere.

When I was in year five at school, equivalent to the sixth grade, our teacher played us the videos in English lessons as part of our work on poetry. Rosen’s interactive nature instantly captured our imaginations, and I still have vivid memories of the class getting into groups and rehearsing some of his poems, something that’s commonplace in education today but would have been a lot more difficult to kickstart if not for his videos.

One of the best things about Rosen is that he doesn’t patronize or talk down to children. He speaks to them as if they’re on the same level; there’s no elitism here, and that’s part of what makes his work so popular. His role is part teacher; part grandfather figure, and part friend.

One of these poems, “No Breathing In Class,” is a fictional take on Rosen’s old school days, and features the tyrannical teacher trope so popular in children’s fiction over the years. As the poem goes on to mention his classmates dying in comical fashion, and the teacher’s inventive methods of discipline, it makes children laugh and almost places Rosen on the same “side” as them, standing against the authority of the teachers.

Whereas other educators like Dr. Jean Feldman have also amassed numerous views of their songs, poems and stories online, they’re typically aimed at a younger audience. There’s a fine line between entertaining preteens and patronizing them with "babyish" material, and Rosen stays firmly on the right side of this. For teachers who work with children a little too old for the three bears, his work is like gold dust.

Some of his videos have amassed millions of views--“No Breathing…” has over nine million views--and have become embedded in meme culture as the original cohort of children who viewed his videos became young adults. The “Noice” meme stems from his most-viewed video: “Hot Food,” another performance of a poem, which has amassed 26 million views, in no small part due to its launch into viral culture. You don’t have to look far to find other edits and memes made based on his videos either. He’s even acknowledged them himself, and certainly seems to embrace his role as a sort of grandfatherly figure in British poetry.

He doesn’t shy away from politics either. A vocal figure on the left of British politics, he was one of over thirty signatories to a letter written in support of the then-Labour leader Jeremy Corbyn shortly before last year’s general election, in the company of Thurston Moore, Brian Eno and other public figures.

When he was ill in hospital earlier this year, a whole host of adults on Twitter--following him for his politics, his writing, or both--waited eagerly for his wife to send updates on his condition. Now approaching his mid-seventies, his illness worried his fans, and his Twitter account has been a hot-bed of good wishes since his hospital stay.

To the relief of thousands, he’s now recuperating and is still active on Twitter. He might not be making the visits to schools that he’s used to, but with home schooling and Zoom classes becoming the norm over the past few months, his videos have made his way into numerous British homes. How do you keep the flame of poetry alive from generation to generation? It’s simple. Just ask Michael Rosen.

Adam England is a UK-based freelance culture journalist, with work in The Guardian, Vice UK, Kerrang! and others. You can find out more about him at www.adamengland.co.uk.