Tucked away in flat files located in the Poetry Center’s L.R. Benes Rare Book Room is a collection of over 800 broadsides—poster-like presentations of a single poem on a single sheet, sometimes with accompanying artwork. Poetry broadsides are often, but not always, printed by hand using letterpress printing techniques. To my eye, the beauty of a broadside lies in the details: splashes of color, the particular slant of a capital A, the slight indentation left by the type as it struck the paper. A broadside demands from its designer careful attention to particulars; you’re likely to fall in love with the nuances of what you’re printing, and the resulting broadsides prove it.

In a typical year, the Poetry Center acquires about eighty new broadsides. Earlier this month, however, our collection grew by sixty-eight broadsides in one week alone thanks to two generous donations: forty-six broadsides from Sam Hamill and twenty-two from Brenda Hillman and Robert Hass. When these packages reached us, we pored over them, taking in the richness of the papers, inks, fonts, and gorgeous poems. The images below present a small sample of the wonderful variety of broadsides we are so grateful to have received. 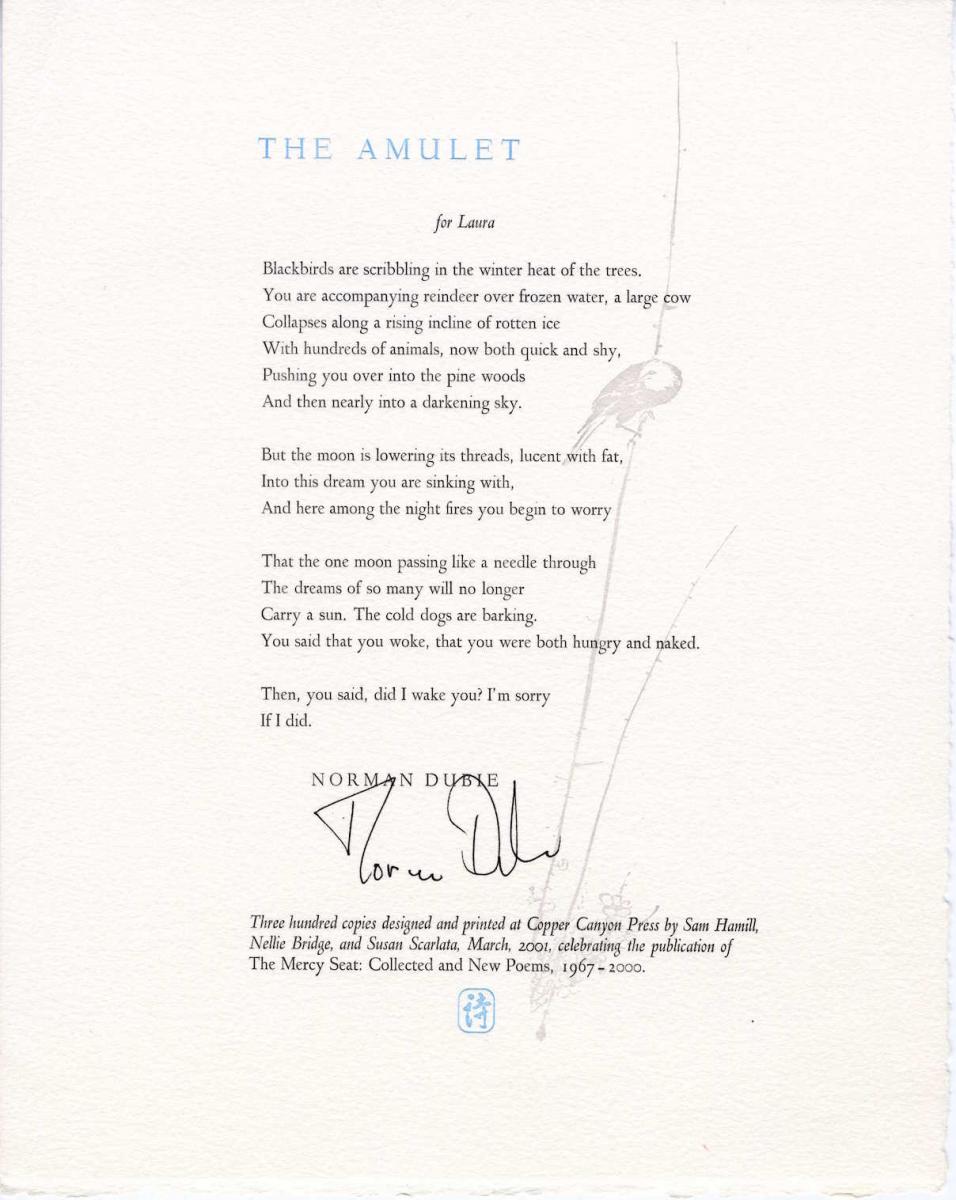 Copper Canyon Press was founded by Sam Hamill and Tree Swenson in 1972, and in the decades since, they have established themselves as one of the major publishers of contemporary American poetry and translations. The broadsides donated to the Poetry Center by Hamill provide a snapshot into the life of the press. Anna Swir’s “I Talk to My Body” and Norman Dubie’s “The Amulet” both celebrate the release of books by Copper Canyon: Swir’s Talking to My Body (translated from the Polish by Czesław Miłosz and Leonard Nathan) in 1996 and Dubie’s The Mercy Seat: Collected and New Poems, 1967-2000 in 2001. I admire the narrow, italicized setting of Swir’s text, which intensifies the feeling that the poem is an overheard conversation. The delicate illustration behind Dubie’s text mirrors the poem’s blackbird “scribbling in the winter heat of the trees,” or maybe the “moon […] lowering its threads.” 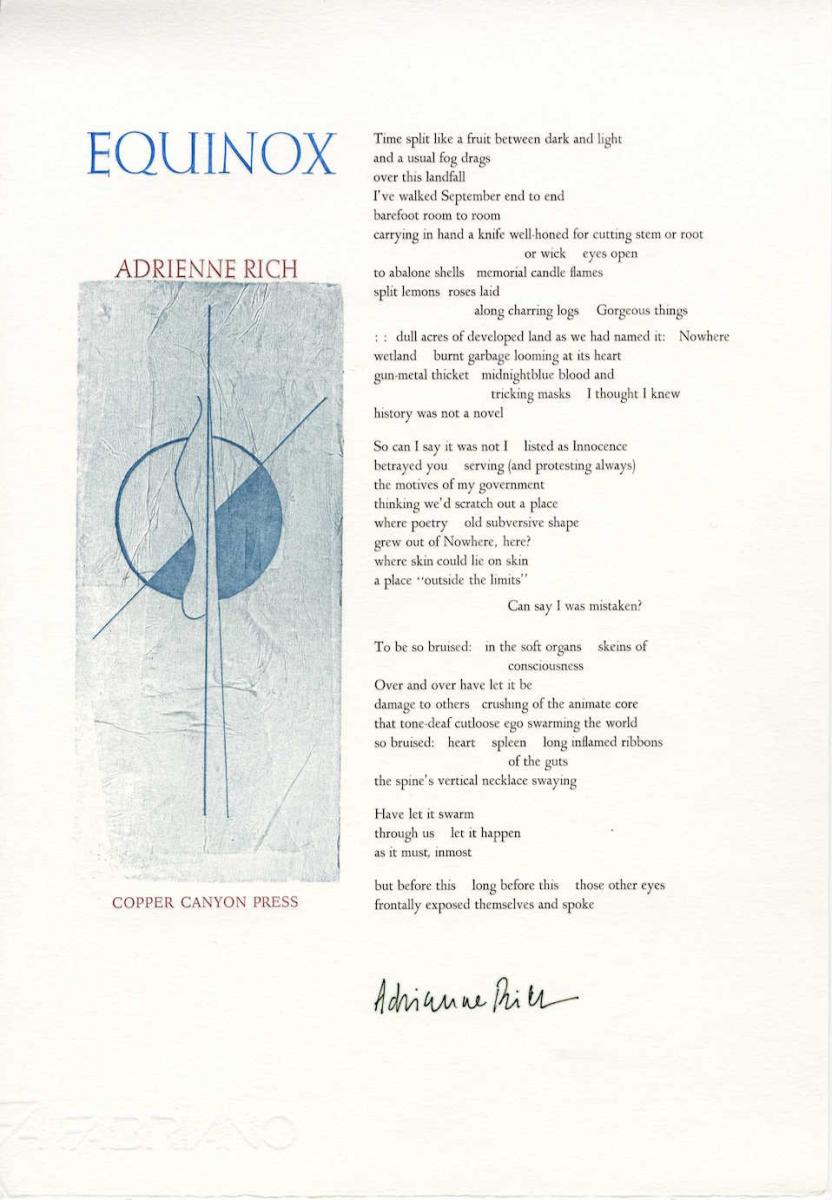 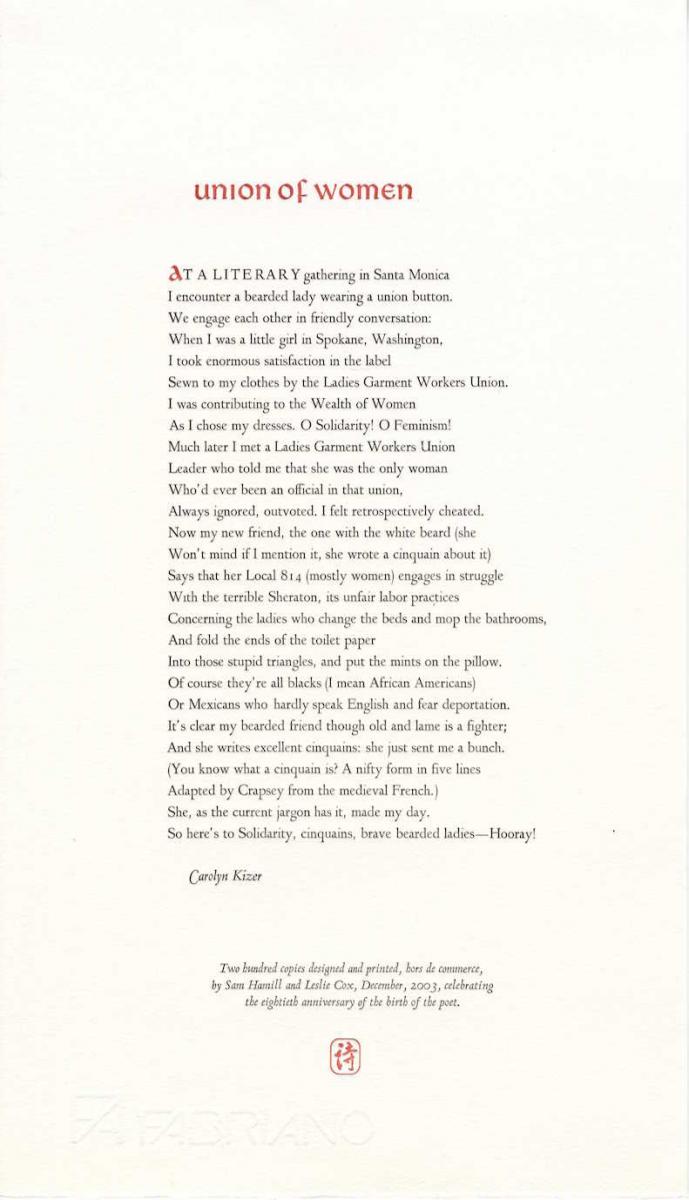 The image accompanying Adrienne Rich’s “Equinox” looks as if it’s been printed over a block wrapped in paper or fabric, the print revealing a network of folds and wrinkles. If you look closely, Rich’s signature has an unexpected halo around it, ink from her pen bleeding just slightly into the paper. By contrast, Carolyn Kizer’s playful “Union of Women” stands on the page as text alone, the poem’s whimsy picked up by the calligraphic font used for the title and initial A. It’s a proclamation of joy on unexpected topics. 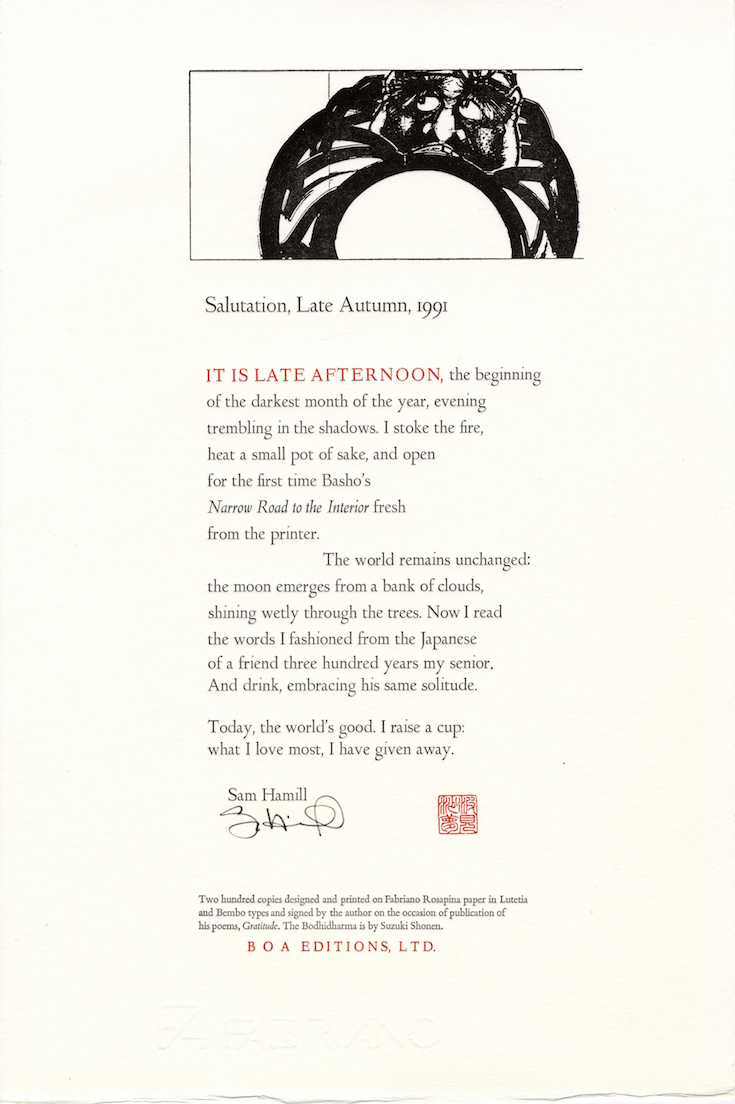 Sam Hamill’s accomplishments as a poet are also evident in the broadsides which he gifted to the Poetry Center. You’ll have to imagine the bumpy texture of that sumptuous handmade paper housing “from A Pisan Canto”—the cattail reed smooths out the surface where it’s been deeply stamped in. “Salutation, Late Autumn, 1991” flows smoothly down the page from the dense black ink of the image at the top to the deckle edge at the bottom. Both broadsides highlight the pairing of energy and stillness in the poems. We’re grateful to be able to add this record of Hamill’s work as a poet, translator, publisher, designer, and printer to our holdings. 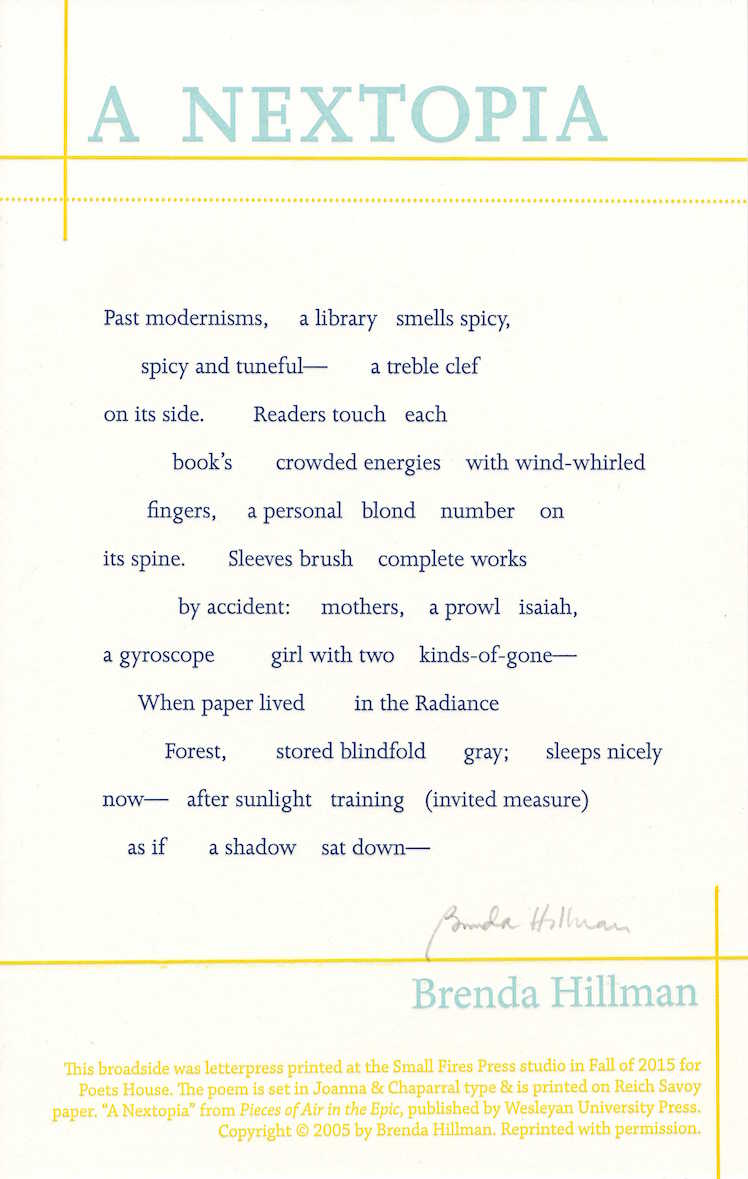 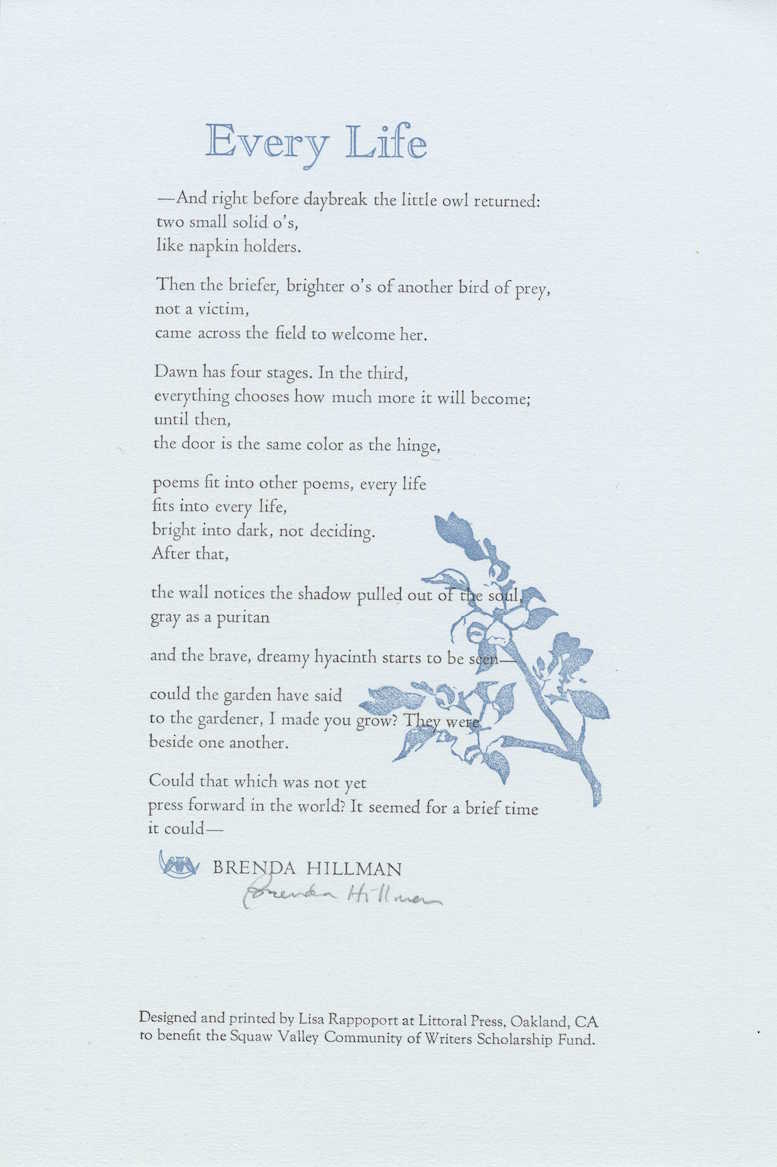 The broadsides donated to the Poetry Center by poets Brenda Hillman, a Chancellor of the Academy of American Poets, and Robert Hass, former U.S. Poet Laureate, demonstrate a wide range of styles, reflective of the many different designers and presses responsible for the works. “A Nextopia,” printed by Small Fires Studio for Poets House in New York City, features bright colors and intensely straight lines impressed deeply into thick paper. The lines at the top and bottom help the dashes in the poem rise to the surface. Contrast this with the delicate approach to “Every Life,” printed by Littoral Press in Oakland, California. The subtle blue and black ink on a thin blue paper points us down to that coy little owl near Hillman’s signature. 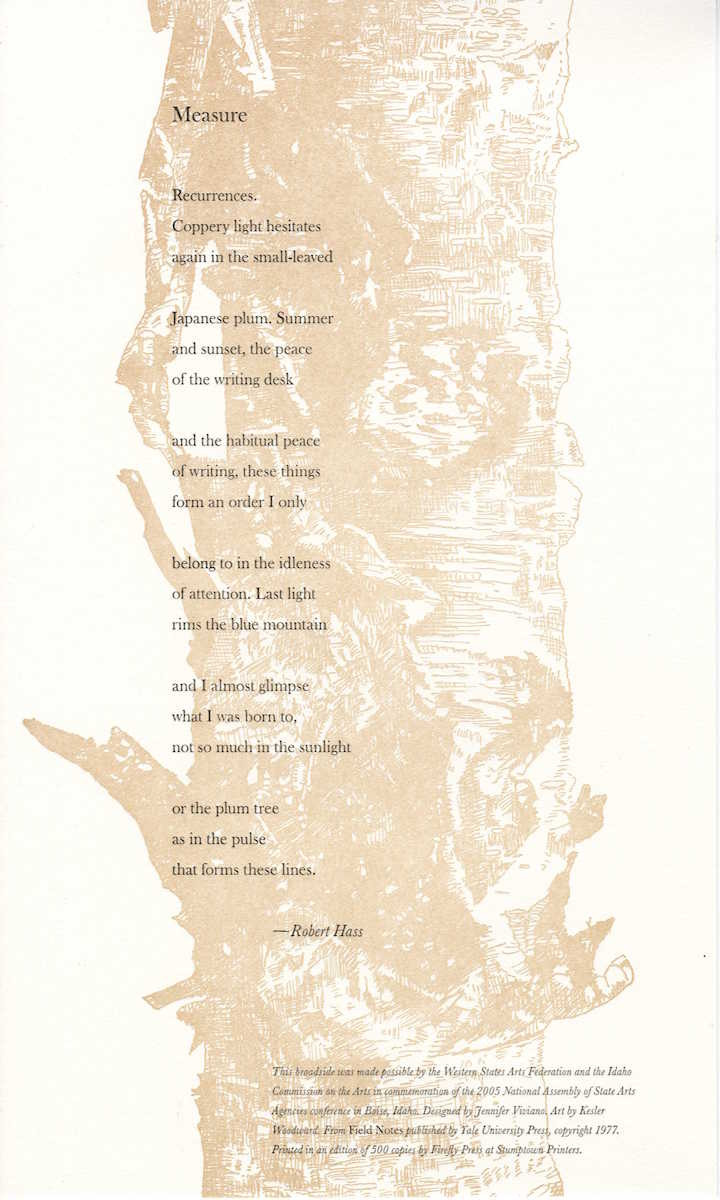 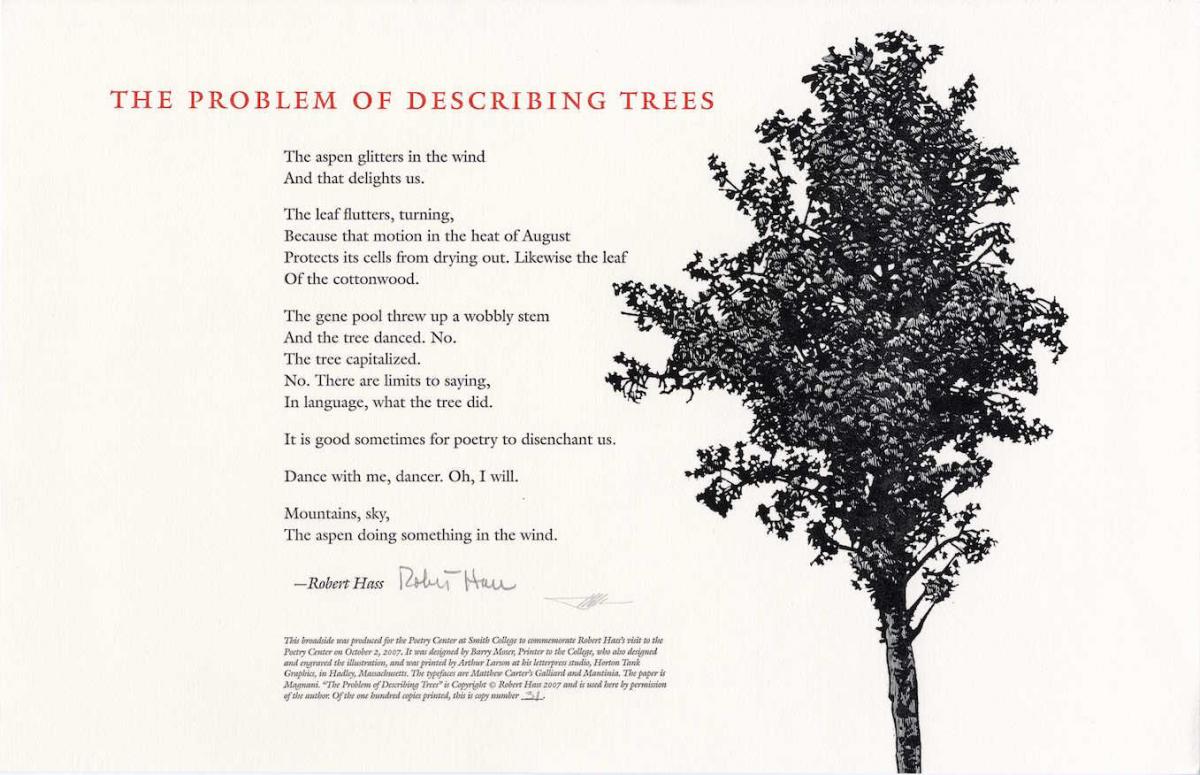 Two meditations on trees and poetry by Robert Hass come to life in very different ways through the broadsides above. When I look at “Measure,” my eyes go first to the illustration with its curls of bark, moving from there to the text that seems to be a part of the trunk itself. The red title text of “The Problem of Describing Trees” grabs my attention first, before it shifts to the interplay between the poem and the wood engraving by noted artist and printer Barry Moser. I love the way the tree and the poem reach toward each other. Thank you to Brenda Hillman and Robert Hass for enriching our collection with these exquisite pieces.

Want to see more? The Poetry Center’s broadside collection is accessible to the public Monday-Friday during our regular hours (a PDF listing of our broadsides, updated annually, is available here). Due to the fragile nature of the collection, it can’t be browsed, but the library staff can help you identify broadsides that would be of interest to you.