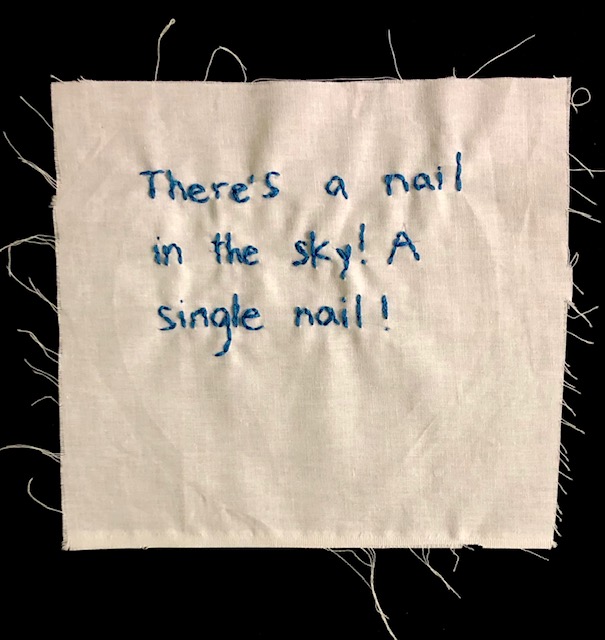 When we, at long last, arrive at that single nail in the sky, they are no longer measuring. They have completed a linguistic journey involving some kind of spiritual math and arrived at the construction of metaphor. Though they have not departed from the notion that love is both something very far away and immeasurable and something that can be calculated, affixed, found.

Is there really a nail in the sky? One child asks.

Where we find ourselves right now is no precious location though my choice to document it with needle (a kind of nail?) and thread--traditional women’s work--might certainly work against that notion. I’ve kept the script rough and raw. I’ve documented the mundane alongside the poetic.

For eight years, I’ve been sewing on 8x8 blocks of muslin things my children say. When complete, these will add up to a quilt top. Queen size. It’s my way of documenting my children coming into language. It also documents my loss for words. I allow their speech to represent my silence. My inability to have a thought of my own while caring for them. 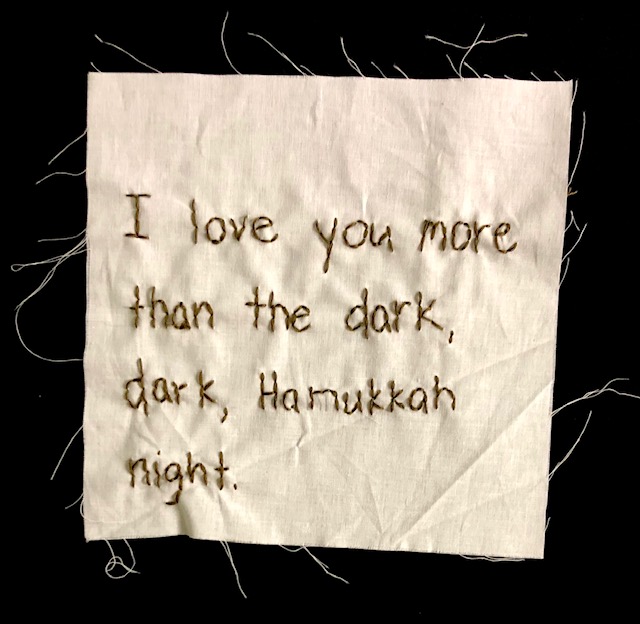 What is real and what is pretend?

My own writing does not contain much metaphor. For me, too many times it’s an ornament that “invents without discovery” (which is what Wallace Stevens thought of surrealism). My mothering certainly has no room for it either. My language must be clear, boundaried.

Why would an old man in a beard break into our house to leave presents? Is he a “bad guy”? They ask.

The nightmare did “happen,” dreams “happen,” so they are real. They say.

On the subject of my particular children’s difficulty in distinguishing between real and pretend, I cannot say more except that these questions are asked seriously, the answers are insufficient, and the let-down is hard. Their responses are informed by their inheritance of intergenerational trauma and a poisoned planet. 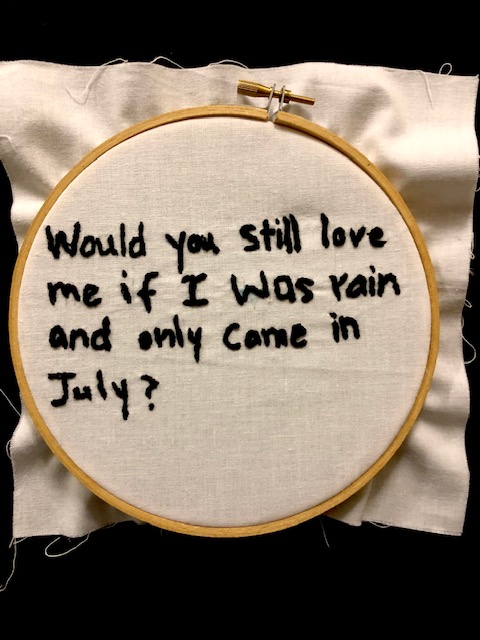 Having spent a decade working to support programs that  “educate the imagination” of young people in the vein of Kenneth Koch, I have been surprised at this turn in not just my life, but my own language use. Metaphoring for the children is more utilitarian than my poetic aesthetic previously allowed. For them, metaphor has practical use. Their metaphors are measurements of not just volume but the distance between themselves and their own understanding, certainly, but also the distance between their inborn wisdom and the idiocy and cruelty of the world as constructed by adults. Adults who should know better. I speak for them here, yes. I cannot fix it for them and for this I will never be forgiven.

Unlike my writing or mothering, it is conversations with other adults where I allow myself to adopt my childrens’ tactics. My speech veers heavily into metaphor, attempting to approximate, measure, detect, diagnose.

Motherhood is camping with wet cats, I say to one friend.

Motherhood is looking into a fun house mirror in 100+ degree heat, I tell another.

And yet, here it is, all the love that fills the dark Hanukkah night, that brings in monsoon to the Sonoran Desert, that evokes these short poems filled with the logic of young lovers, (“I love you more.” “No, I love you more.”) a hypothetical test of the miracle (“would you still love me if…?) that is us. It is shelter, antidote, balm, and all I can offer my small humans hurtling through the galaxy, on this planet earth, inheritors of the anthropocene.

Renee Angle is a writer, artist, and author of a hybrid collection, WoO (Letter Machine Editions, 2016), her writing has appeared in the literary journals P-QUEUE, Entropy Magazine, The Rumpus, Western Humanities Review, The Volta, Diagram, in addition to the anthology I'LL DROWN MY BOOK: CONCEPTUAL WRITING BY WOMEN (Les Figues Press, 2012), and in the chapbook Lucy Design in the Papal Flea (dancing girl press, 2010).  She has attended writing residencies at the Millay Colony for the Arts and MOCA Tucson AiR program. She is the recipient of a 2019 Arizona Commission on the Arts Research and Development Grant and the Bill Desmond Writing Award for her non-fiction writing.  For over a decade she worked at the University of Arizona Poetry Center, curating programs for both adults and youth.