In Spring 2018, after a performance of Macbeth for Shakesqueer Tucson—a troupe we’re both part of—musician and theater artist Adam Frumhoff asked a few of us if we’d like to hear songs from a project he’d been working on. Egged on by our enthusiastic nods, he grabbed his guitar and launched into a country version of a Midsummer Night’s Dream monologue that was so haunting I hummed it for days. The project continued to evolve over the next year and a half—eventually becoming James Woodruss: The Songs and Sonnets of William Shakespeare—and on February 1st Frumhoff will perform the song cycle for the first time, with a full band, at El Crisol.

Songs and Sonnets has been in development since 2017, when Frumhoff heard that friends were putting on a queer performance of Twelfth Night and decided to audition. He was cast as Feste, a court fool who performs several ditties throughout the play, including “Come Away, Death” and “O Mistress Mine.” Frumhoff decided to arrange music for the songs and, while some got cut during script abridgements, the ones that did make it into the polyamorous, space-themed staging of Shakespeare’s mistaken-identity comedy were a highlight of the production.

About a year later, while preparing for his role as the Porter in Macbeth, Shakesqueer’s second production, he remembered the songs he worked on for Twelfth Night and decided to take another look at them. Frumhoff—who performed with Tucson-based Americana band The Wanda Junes for several years—had initially arranged the songs to suit Feste’s comic nature, but when he re-read the lyrics he immediately started imagining them as country tunes.

“The songs in Twelfth Night are really beautiful, but some of them are really dark,” Frumhoff told me, “I was struck by how country was a perfect fit—it was so natural.” 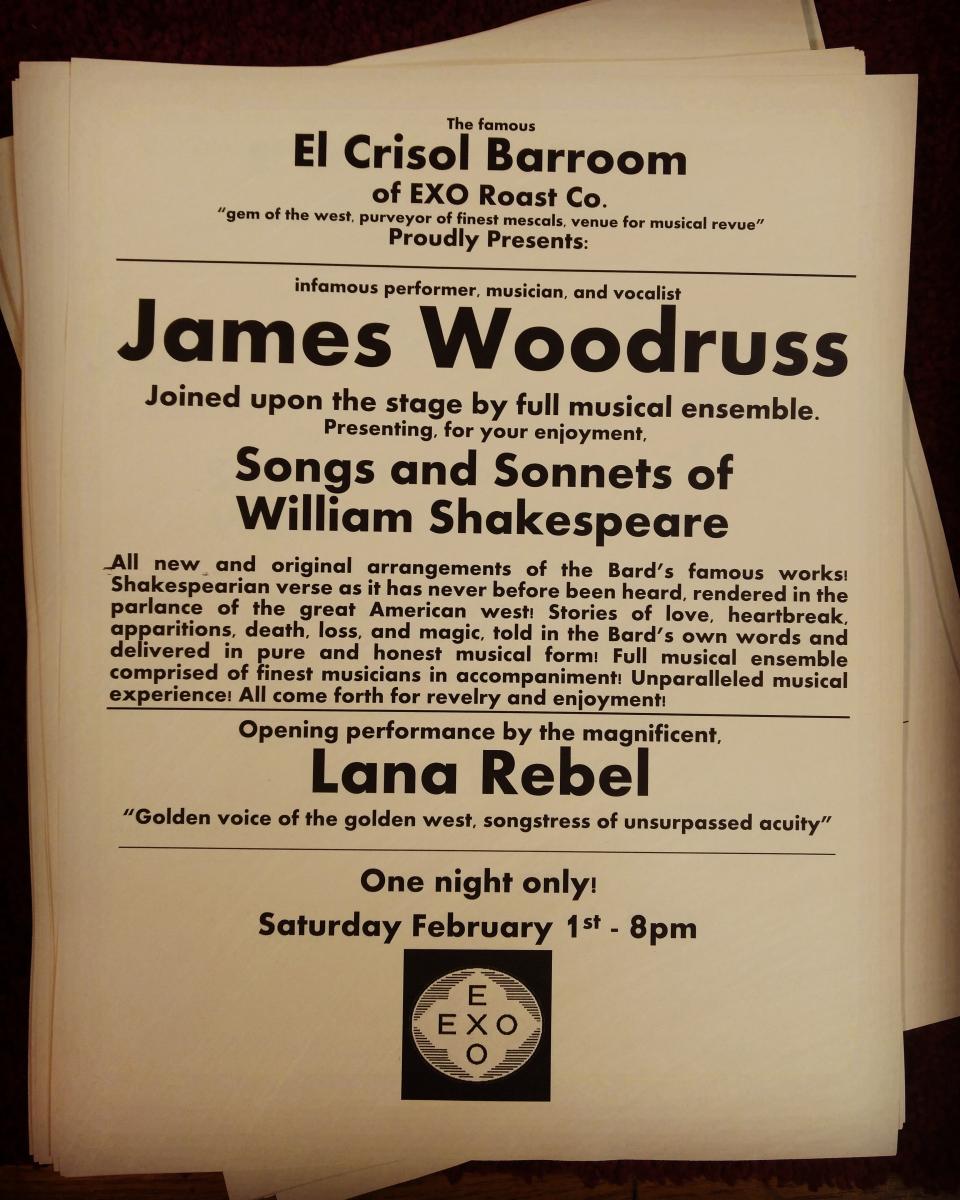 Soon, Frumhoff found himself leafing through a volume of The Collected Works of William Shakespeare for sources of lyrical inspiration, including sonnets and snippets of monologues. He also began developing Bard-inspired songs for other projects, including Shakesqueer’s 2019 production of As You Like It—for which he arranged music—and the Backup Brass Band, a wonderfully motley marching band that performs at protests and political benefits (Frumhoff is their trombonist). Some of the tunes that he wrote for the band, including “Stephano’s Walt,” about a boisterous butler from The Tempest, and “The Madness of King Lear,” inspired by a production he saw at The Rogue, will be on the upcoming Songs and Sonnets record. In order to make this record, and perform the songs live, Frumhoff reached out to almost every musician he had ever worked with, and about a dozen joined up (Jeff Reinhardt, Mark Fullmer, Becky Diamond, Esteli Kitchen, Allison McGillivray, Thom Plasse, Dimitri Manos and Ryen Eggleston will all take the stage at the El Crisol performance).

Frumhoff writes and performs under the persona of James Woodruss, a character in a literary narrative he’s been working on for several years. Woodruss is a musician who leaves his small Ohio town to go west and make his living as a traveling songster.

“His story takes place in the late 1800s,” Frumhoff said, “There’s something that feels very Old West about [Songs and Sonnets]—the way the songs are put together, they don’t sound like modern country songs, they sound like really old country songs. It felt appropriate to use James Woodruss as this fictional persona from the late 1800s singing these songs written in the 1500s and 1600s. It’s allowed me to have a theatrical interpretation of theatrical work.”

Frumhoff is particularly inspired by theater’s history as a popular art form, something he’s seen personified in Shakesqueer.

“We go to [rural Arizona communities] Arivaca and Ajo, and we’re setting up our productions in a park. There’s almost no budget for the play, and we’re not ‘professional actors’,” he said, “Doing these productions feels to me like what the roots of theater were—that was the entertainment that was accessible to working-class people, theater and music.”

It’s this ethos that James Woodruss: Songs and Sonnets of William Shakespeare plans to bring to the stage on February 1st, where the Bard’s words will ring out as a mix of sea shanties, jazz, folk, and, most of all, country tunes full of dust and longing.

James Woodruss: The Songs and Sonnets of William Shakespeare will be performed on February 1st at El Crisol, Exo Roasting Company’s mezcal bar. Door at 7 pm, show at 8 pm, with a $5 cover.