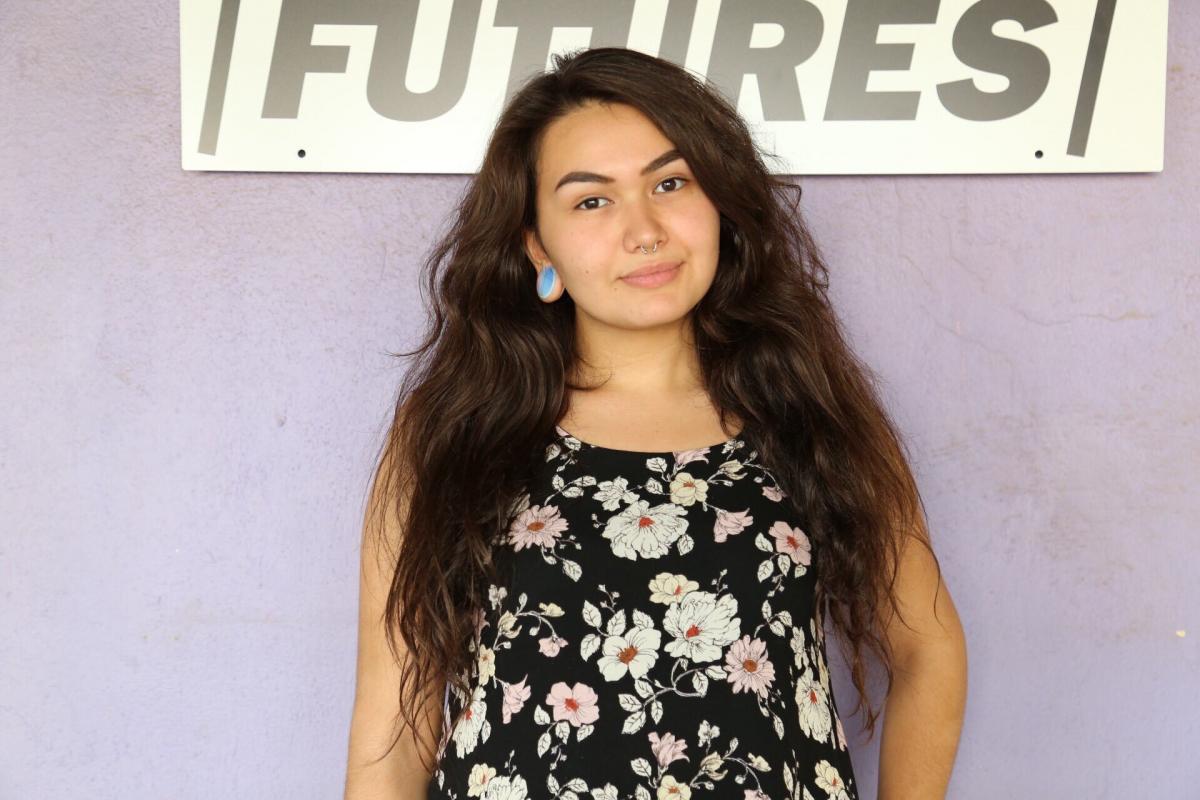 According to La Pilita Cultural Center site coordinator and poet Enrique Garcia Naranjo, Spoken Futures is “a youth-centered arts and community engagement organization based in Tucson and serving the greater Southern Arizona region. Co-directors Sarah Gonzales and Logan Phillips work with an all-youth staff on three core programs, the Tucson Youth Poetry Slam (TYPS), Liberation Lyrics and Kaleidoscope, as well as the La Pilita Cultural Center in Barrio Viejo. Since 2010 the TYPS has been the primary program supported by Spoken Futures. The poetry slam is organized and hosted by Program Coordinator, Eva Sierra, a former youth participant from Douglas, Arizona who after graduating high school moved to Tucson and joined the Spoken Futures staff. Together, these programs further the Spoken Futures mission, to ‘widen access to the literary arts and community engagement for young people across Southern Arizona. Through dedication, irreverence and love we use poetry as a tool to dream tomorrow; honor yesterday and live today.’”

I sat down with Eva Sierra to talk about Spoken Futures, her work with the Tucson Youth Poetry Slam, and how her poetry has grown and changed over the past few years.

Could you tell me a little bit about Spoken Futures and its programs?

Three of the big themes with Spoken Futures and its programming are poetry, social justice, and youth. A lot of our programs combine those three things. Everything we do is for the youth of southern Arizona or Tucson. We have the Tucson Youth Poetry Slam, which is what I'm mostly involved with. That's a monthly poetry slam. A lot of poets through that learn about social justice, like through the writing workshop--before every slam, there's a writing workshop. So they get to learn and also it just gives you, if it's your first time, something to read on the mic.

Another workshop opportunity is Liberation Lyrics. It's a once a month writing workshop, with a curriculum based around social justice. Right now what's up and coming is the Kaleidoscope program, and one of the programs of Kaleidoscope is the Queer Youth Art Showcase. That's a program that's more geared toward queer youth and that's a broader-than-poetry type of thing.

Well, we'd like to have visual art and we've had a little bit, but it's still pretty new. The idea is visual art and performance art, poetry, anything really--just across the board, showcasing queer art.

How did you get involved in Spoken Futures?

I started off in the Tucson Youth Poetry Slam when I was maybe fifteen, and I became really regular when I was sixteen and seventeen. After I finished the season when I was seventeen, I joined the staff and that's when I became more involved in coordinating the event, and I eventually became the TYPS coordinator.

In some of your poems, you write about how you grew up in Douglas [two hours southeast of Tucson]. How did you hear about Spoken Futures?

We had a teacher at my school that was setting up a field trip to the TYPS. I got on it once when I was fifteen and I really liked it, but it's kind of hard to come up to Tucson when you're fifteen. It's a two-hour drive, so unless your parents took you, you didn't get to go. I tried to do open mics in Douglas and get involved and jump on that if it were ever to come up, and in Bisbee, too, if it were ever to come up, and it did a couple of times. It was kind of a fad for a while for everyone in Douglas to go to the TYPS.

So you're currently the Spoken Futures program coordinator. What does that role entail?

It’s steering the overall boat that is the TYPS. Everything from figuring out who the feature poet’s going to be for the next slam--laying it out a few months in advance, contacting the feature and making sure that they know what their responsibility is as a feature, as well as collecting a bio and a photograph to promote the event. We'll do Facebook, a mailing list, different things like that, and there's a blog as well. Keeping up with all of the platforms and promoting the actual event. On the day of the event, figuring out the volunteer roles and figuring out what we're going to talk about. After the writing workshop is the community meeting where we get all of the poets and talk to them about what is going on with Spoken Futures and other programs, and what's going on with the community poetry-wise as well. TYPS is on all of the social media outlets, too, so plugging people to post in different places.

Do you have a favorite part of the job?

My favorite part is the easiest part even though it looks like the hardest part--hosting the TYPS itself. I've been doing it for so long. Araceli [Montaño], who was the previous coordinator, prepared me really well to be able to host on my own. Now I host with another co-host. This season it's just been different co-hosts. I think that's the most fun part.

What is it about Spoken Futures and the TYPS that allows these programs to connect so well with high schoolers in southern Arizona?

I think a lot of it is the Youtube and the Twitter--people are able to see their friends, and they're like, "Hey that's my friend doing this thing!" Even if they don't necessarily know the other person, just to see someone your age talking about stuff that might relate to you. There's lots of networking going on with that. The platform is really useful--people really get inspired and get involved; it's very self-perpetuating.

And TYPS has been around for a while right?

Yeah, it's on its eighth season.

Have you grown and changed as a poet during your years working and performing with Spoken Futures? If so, how?

I've had a lot of practice--I used to write a lot of slam-type poems, right? That's the Tucson Youth Poetry Slam. Now I write more poetry that's less slammy and more on its own. I've gotten a lot of practice, too, and also practice with delivery on the mic, as well. It’s helped me a lot with academic writing, too--just having a lot of practice, I've written a lot. Especially in a situation like TYPS, you're writing and performing sometimes the same piece over and over again, you're doing it and you're coming back the next month and it's refined and it's tuned and you learn how to more directly say what you're trying to say. That's how you get better in your writing, you get more defined on what you want to say.

Yeah, it really is. You watch other people grow, too, and it's inspiring.

I watched a couple of your poems from the Tucson Youth Poetry Slam. Is it okay if I ask you about them?

In some of your poems, like "El Orgullo" and "Sacrifice," you talk about growing up along the US-Mexico border. What does it mean to you to be a poet in the borderlands?

I think it's a really untalked about perspective. I talk a lot about humility and recognizing where you're from, recognizing your sister city and stuff like that. Being bilingual and being multicultural. I feel like all of that stuff really needs to be talked about. It's its own thing, you know? The culture that exists on the border. All these people are speaking two languages and existing in two cultures and for them it's one larger ... I don't know how to explain it, but I think it's something that needs to be perpetuated more, there should be a lot more writing about the border. In this type of way, less academic journals and stuff like that but poetry and art about this sort of thing, you know?

Is there anything in the works with Spoken Futures that you're particularly excited about?

I'm excited to see how the programs will transform and what forms they'll take in the future. They're always in a state of transformation--for example, Kaleidoscope is the fastest growing program right now, with the queer youth art showcase. We're looking at a different venue for each event. So this is going to be the fourth one now, the fourth installment, it's like a seasonal thing. I just really like the momentum that it's gaining. I feel like TYPS is kind of the older brother that's trying to stay relevant.

I know slam poetry is very dynamic but the way that the youth are right now they want something very flashy and more dynamic. With the drag show, combining that with the poetry, it's gaining a lot of momentum. Plus, it's good to have a queer exclusive showcase that still has straight people coming to it because that's more inclusive. All the queer people were coming to TYPS and listening to straight people poems, but now it's like all the straight people from TYPS are coming to QAS and just sitting in the audience and enjoying it. It's exciting to see that this program is really taking off!

This interview has been edited and condensed.