Called one of the “greatest living poets” by the Poetry Foundation, Alice Notley was born in Bisbee, Arizona in 1945 and grew up in Needles, California in the Mojave Desert. Notley's work has been immensely important to me as a writer, and if you want to hear more about how I came to be so deeply impacted by it, I'll be introducing her at her reading tomorrow night.

Notley is the author of many books of poetry, and of essays and talks on poetry, and has edited and co-edited books by Ted Berrigan and Douglas Oliver. She’s edited magazines and is the recipient of many, many prizes and awards, including the Los Angeles Times Book Award (for Mysteries of Small Houses, which was also a finalist for the Pulitzer Prize), the Griffin Prize (for Disobedience), the Academy of American Poets’ Lenore Marshall Prize (for Grave of Light, Selected Poems 1970-2005), and the  Poetry Foundation’s Ruth Lilly Prize, a lifetime achievement award. Above all she is a full-time poet, at this point an internationalist and haunter of Paris, remaining an American, an ex-New-Yorker, and a desert denizen. Her most recent book is Certain Magical Acts, from Penguin.

She was kind enough to answer a few questions for the Poetry Center in anticipation of her reading. Note: some answers are edited or excerpted for length and/or clarity.

Poetry Center: Certain Magical Acts is the latest of your more than twenty-five books. In the first few lines of “I Couldn’t Sleep In My Dream,” the opening poem, you write “I want to live here, where nothing coheres.” This disjoin and unfastening is something I recognize from some of your other work, too, though I’m thinking specifically of Culture of One. What draws you to liminal, disorderly spaces in your writing?

Alice Notley: I don't think the word "disorderly" is correct -- perhaps the right word is "uncreated." But one answer to your question is actually in the subsequent lines of the poem: 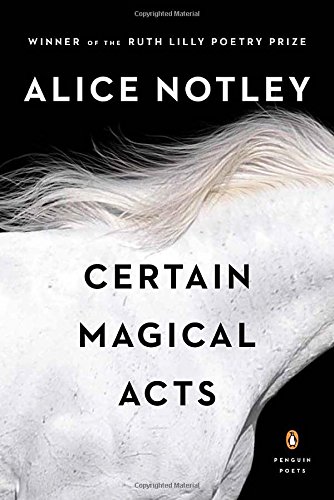 Who'd be in ordinary life, working or shopping,

looking forward to whatever it turns out it's about,

in the eyes of belief. I don't believe something . . .

That is, our production of the world, our interpretation of it, what we've been told to experience and what we've been told we have to do, both bore and distress me. I don't want to live in someone else's dream. This particular poem begins in a dream of mine and expands from it. Dreams interest me so much partly because there's no explanation for them, and no one really tries to explain them. I use them as a valid part of my experience. Examples of things I like about dreams: you don't have to walk a long way to get somewhere; you see people in them you've never seen before; there is no closure; poems and songs come to you that you don't have to take the trouble to write. There is a magic place one can go to to write poems: thus the title of my new book, Certain Magical Acts.

PC: I love that—using dreams as a valid part of your experience. Do you have any particular dream rituals (dream journaling, lucid dreaming, etc.)? How do you go about writing a dream?

AN: I write down any dreams or bits of dream that I remember, when I wake up. I usually consult the dream notebook before I write in case there's something there I can use. But there are a lot of different ways to use dreams beyond simply converting them into a narrated poem -- you can keep writing from a single dream detail, you can use words as words that came up in the transcription, you can invent, improvise, go completely elsewhere.  A dream is just something else you did; what happened in it is something else that happened. I like to write dream-like entities that I didn't dream. When I read one of my longer books that contains a lot of dream mixed with material made up on the spot, I can't always remember which parts I dreamed and which parts I made up. I sometimes suspect we dreamed this world into existence, dream our societies and our lives. Poetry itself is different from dreaming, because it has a more deliberate form and because it has its ravishing sound.

PC: What excites you when you read a poem for the first time? What makes you return to a poem?

AN: What I like first is something about the sound of a poem, which I can get from the page, if the poem's good, but it's always better read aloud. There's always something appealing in the mix of sounds, but what I'm talking about isn't blatant and is hard to describe: how all the letters of the words make a mix and move along. I like being in the real world of poetry, the essential world, world of the essences of words. But I can be attracted by qualities in a poem like friendliness, charm, pathos, humor, etc. These qualities however are perceived individually, and what is charming for me isn't for another. I can get interested in something like word order -- e.g. I like Allen Ginsberg's word order and I also know he worked very hard at it. I love Racine's line, which seems to be the bane of many French school kids, but which is so beautiful and so gets into the body. I like disruption and enjambment and broken-phrase stuff depending on who does it. I like not knowing what word will come next in a John Ashbery poem. I like the absolute tragic grandness of Anna Akhmatova.

PC: One of the questions we’re considering this year at the Poetry Center is language’s role in shifting conversation, specifically around climate change. The natural world in Certain Magical Acts often has a feeling of apocalypse and ruin. Is there a way in which poetry can articulate our ecological present in a way that perhaps other writing forms cannot?

AN: Maybe.  Poetry has different tones of voice and vocabularies available to it and can even mix them.  Environmental ruin is something we experience all the time now but as part of everything else we are doing and thinking; poetry is good at presenting inside and outside, mind and experience, imagination and outer circumstance at the same time.  It can be dense and clear and forlorn and yet serene all at the same time.  The first time I dealt with global warming as a theme was in my long poem Désamère that I wrote in 1993.  It is a narrative fiction that takes place in a desertified world, and it tells the story of the 20th century up to that point, it presents the inner life of a female character, and ends with a group of poems that are about both "real" Nature and "imaginary" nature.  After that, global warming as a subject became embedded in my work and is a feature of almost every book of mine but never in exclusivity.  Because I am still living and everything else is still going on.

PC: There is so much new poetry in the ether and so much of it is exciting for its nontraditon.  How does one find new ways to be disobedient in poetry?

AN: There's a now long tradition of nontradition:  therefore nothing looks new to me.  Though it might be.  What's really new when something's new is a change of consciousness or sensibility in poetry, and that dictates novelty of form if a new form's involved.  It's not so easy to change consciousness or that evident that there's been a change.  It comes from inside you the poet.  In other words you have to listen for the poem demanding to be written, to the exclusion of what your friends might say should be written, or the school or group you seem to be associated with, or whatever theory of novelty or shouldness -- "you should write like this!" -- is being passed around.  The poet serves poetry, not society, which is a group fantasy.  Poetry does make for change, but it does it by being rather singular.  It is involved in the creation of reality out of tiny sounds and meanings, sort of like particle physics but on the creation level.  I know this sounds highfallutin, but I believe it.